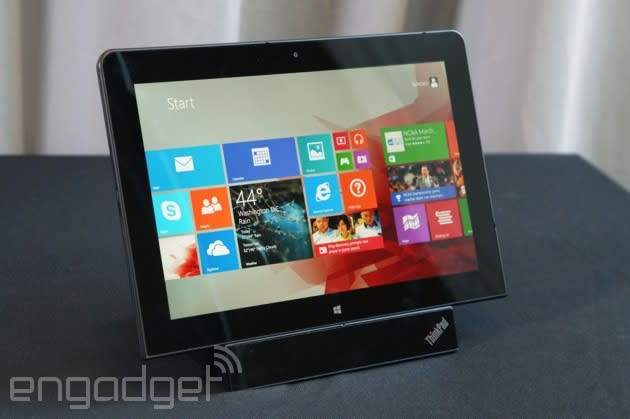 Some companies throw gadget spaghetti at the wall to see what sticks. Others... keep the same tablets around for nearly two years. We've seen Lenovo be both those companies, frankly, but when it comes to its business line, at least, it tends to move at a more glacial pace. Case in point: Nearly two years after announcing the ThinkPad Tablet 2, Lenovo has finally unveiled its successor, the previously leaked ThinkPad 10. Even then, it feels like more of the same: a 10-inch tablet with an Intel Atom processor, dual 2MP/8MP cameras and a 10-hour battery. This time, though, it brings a sharper, 1,920 x 1,200 display, effectively matching rival tablets in this price range. Like its predecessor, it'll be offered with options for pen support, TPM, 4G and fingerprint/Smart Card readers, though we're told most of those features, save for pen support, won't be available at launch. Under the hood, it runs Windows 8 Pro, with a quad-core Bay Trail CPU and 64GB-128GB of storage (expandable via microSD). Prices start at $599, with shipments starting sometime in June. Got it? Good. Even more than the tablet, we think you'll be interested in the accessories -- and there are lots of them. First up is a $129 keyboard case, with chiclet-style keys, a multitouch trackpad and a slot for the pen (you know, should you get one of the pen-enabled models). Then there's the lighter-weight folio case, which has a flatter, Surface-style keyboard -- one with concave, space-saving buttons. That, too, has a pen holster, and will retail for $119 when it arrives this summer.

Moving on, there's yet another case -- a ruggedized model with an adjustable hand strap on the back, gaskets around the ports and, yes, a place to stow your pen. And, because it's difficult to remove and put on (we can vouch for that), it's designed so that you can dock it with the case still on. That will arrive sometime this summer for $69. Speaking of docking, by the way, there will also be a $119 base station (the one you see in the photo above), which adds three USB 3.0 ports, with one always on so that you can charge something else, like your phone. In addition, it features an HDMI socket along with an Ethernet jack.

Wrapping up, Lenovo is making a bigger version of its Quickshot case -- the same one it already sells alongside its ThinkPad 8 tablet. As ever, the hook there is that when you pull back the dog-eared corner, the camera app automatically opens so that you can -- wait for it -- quickly take a shot. That will retail for $59. Finally, if you want to buy the pen on its own, that'll be $50. So, uh, don't lose the pen that comes with your tablet, OK?

In this article: hands-on, lenovo, lenovothinkpad10, thinkpad10, uk-reviews
All products recommended by Engadget are selected by our editorial team, independent of our parent company. Some of our stories include affiliate links. If you buy something through one of these links, we may earn an affiliate commission.