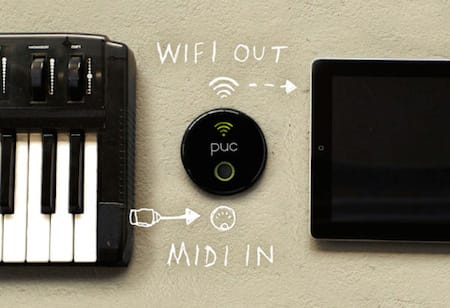 The PUC MIDI interface (US$129.99) connects MIDI devices (keyboards, drum machines/pads, DJ controller, floor pedal, etc) to iOS devices (or Macs) wirelessly. This is fantastic news, because the joy of the iPad and iPhone is that they're wireless, multi-function devices. Connecting wires makes them stationary and often singular in purpose, which is more often than not a nuisance.

The PUC looks like, well.. You guessed it. A puck. It's round, plastic, black and fits in the palm of your hand. On the top is a single power button and a light indicator shaped like Apple's symbol for wireless connectivity. The underside has a removable cap, which exposes a compartment for two AA batteries (included). On the front side is a standard MIDI port connector (cable included, too). The backside has a micro-USB input for auxiliary power. The top and bottom of the PUC are covered in a shiny, glossy plastic, while the sides are covered in a lighter colored, rubber-like material. It's a good looking design, with a pleasant feel to it. With the two AA batteries inserted, the PUC feels weighty and solid, just like a real puck!

The PUC is really easy to use. Connect the MIDI cable to the PUC input and the other end to the output of a MIDI device -- I used a M-Audio Axiom 49 MIDI keyboard. To turn on the PUC, press the power button on the device after making sure you've inserted the AA batteries or you're connected to a power source via the micro-USB port. You'll see the power button light up in green as well as the wireless connectivity symbol flashing green. This means the PUC is waiting to be connected.

On your iOS device, download the free PUC Connect app (iOS App Store link). Once downloaded, connect your iOS device's wireless network to the PUC's network and open the app to complete the connection. The flashing green on the wireless indicator turns solid, indicating that you're connected. From there, I launched GarageBand and started playing through the various MIDI keybaords, synths and drums without a hitch. A nice touch is that whenever a signal is being sent from the MIDI device through the PUC to the iPad, the solid green lighting on the PUC flashes red.

Not having wires connected between my MIDI device and iPad was a great experience. Too often I've felt the process of using my iPad as part of a music setup -- requiring wires trailing all over the place between devices -- cumbersome and frustrating. Thanks to the PUC, the process was a pleasure. I could move my iPad around, get someone else to tweak a sound setting, or even just pick it up and walk away without worrying about cables or disrupting the setup.

That's exactly why the PUC is awesome, because any scenario where you don't have to use a cable is a good one - especially when it comes to the creative process in a portable context.

The PUC is available for pre-order now and will ship in mid-June.

Update: Regarding latency, during my test there were a couple moments where I did wonder if I could hear a slight latency between triggering a sound on the MIDI controller and that sound registering on the iPad. I got in touch with Zivix, makers of the PUC, to ask them about latency. They said, "The Zivix team has noticed a negligible latency between the PUC and an iOS device registering a MIDI signal, and one that doesn't affect the overall performance or experience by using the PUC."

I do agree with Zivix. While there may be a slight latency, in most applications I can't foresee it being a problem. It's worth noting that the MIDI controller simply triggers the audio that's stored on the iOS device (or Mac). That audio is not traveling through the PUC, just the MIDI signal that triggers it.

In this article: creative process, features, GarageBand, iOS, m-audio, MIDI, midi controller, midi interface, MidiController, music, music making, PUC, review
All products recommended by Engadget are selected by our editorial team, independent of our parent company. Some of our stories include affiliate links. If you buy something through one of these links, we may earn an affiliate commission.