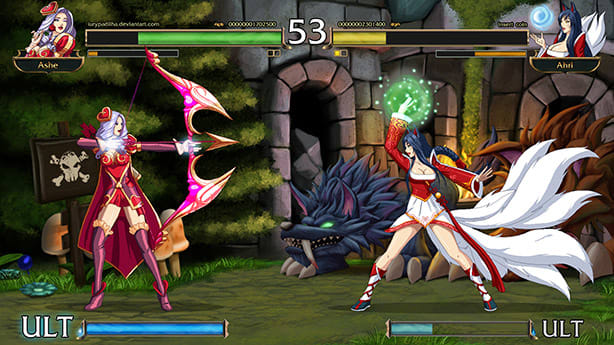 League of Legends may not share much in common with your average 2D fighter, but the hyper-popular multiplayer online battle arena does feature a large, diverse cast of champions, which was enough impetus for Brazilian artist Iury Padilha to reimagine the MOBA in a more intimate combat style.

Padilha recently uploaded images to his DeviantArt account which depict League of Legends characters squaring off in traditional Street Fighter-esque mano a mano fisticuffs. While Padilha clearly owes much of his personal style to anime and manga influences - somehow even moreso than Capcom's stable of Japanese artists - he does an excellent job of translating champions from one medium to another.

Even more impressive are the backgrounds Padilha has designed, which depict small scenes drawn from League of Legends' various battlegrounds with a slightly muted color palette. This tone seems more apropos for the source material, even as it contrasts with the more cartoonish style Padilha lends his characters.

You can find the entirety of Padilha's efforts by visiting his DeviantArt page, along with a much higher resolution version of the image above.
[Image: Iury Padilha]
Via: Kotaku
Source: DeviantArt
In this article: fan, fan-art, fighter, iury-padilha, league-of-legends, pc
All products recommended by Engadget are selected by our editorial team, independent of our parent company. Some of our stories include affiliate links. If you buy something through one of these links, we may earn an affiliate commission.