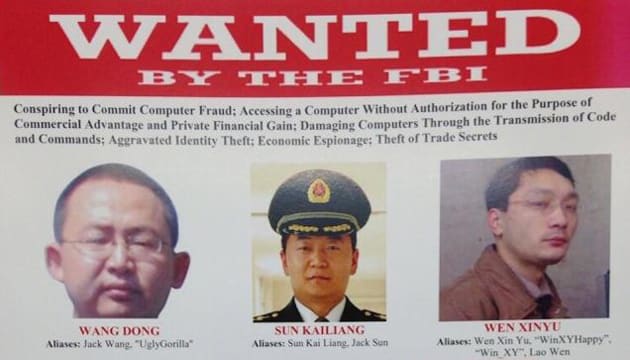 The Department of Justice has taken the unprecedented step of charging five officials from the People's Liberation Army of China, who are accused of hacking into six American private-sector companies in order to steal trade secrets. Electrical and metal engineering companies like Westinghouse, Alcoa and Solar World are among the victims, and the DoJ believes their "sensitive business information" was stolen specifically to give a competitive advantage to Chinese state-owned companies. In the words of Attorney General Eric Holder:

"This Administration will not tolerate actions by any nation that seeks to illegally sabotage American companies and undermine the integrity of fair competition in the operation of the free market."

The indictments might seem strange, given that none of the Chinese individuals may ever be physically hauled from their unit (said to be PLA Unit 61398 in Shanghai) to face prosecution in the US. Nevertheless, the move comes after increasingly vocal warnings from both the DoJ and the Pentagon that cyber-spying won't be overlooked merely for the sake of wider US-China relations. For its part, China has always insisted that the problem runs both ways, and that it's equally a victim of US espionage -- although that response hasn't really tackled the (blurred) distinction between spying for military purposes, versus using military resources for commercial spying.

Source: US Department of Justice 1, 2
All products recommended by Engadget are selected by our editorial team, independent of our parent company. Some of our stories include affiliate links. If you buy something through one of these links, we may earn an affiliate commission.