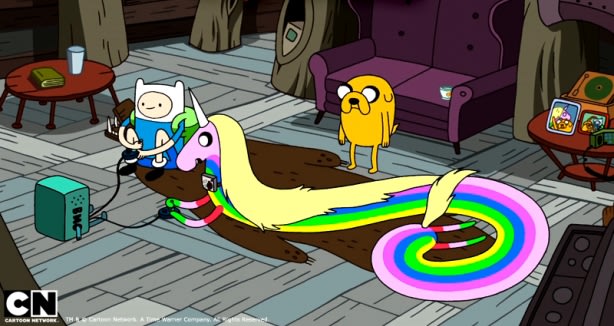 Pendleton Ward is no stranger to gaming. His popular cartoon, Adventure Time, frequently references video games and tabletop roleplaying games, and even features an anthropomorphic video game console as a recurring character. Perhaps it's little surprise, then, that Ward would create a game (or something closely resembling a game) on Twitter.

Yesterday, Ward tweeted an image of a jail cell with the caption: "You wake up in a dungeon cell. What do you do:" Ward then accepted input from other Twitter users, drawing the results, as if players were experiencing a classic text adventure game. He's since renamed his Twitter account "Quest Attack" and has continued to draw out players' progress and commands. It's kind of like Twitch Plays Pokemon, only there's a real human being being directed by the mob of onlookers.

Since the game is operating in real-time, it gets put on pause every so often when Ward needs to take care of real-life business. Such as business lunches.
[Image: Cartoon Network]
Via: Laughing Squid
Source: Twitter
In this article: adventure-time, pendleton-ward, text-adventure, twitter
All products recommended by Engadget are selected by our editorial team, independent of our parent company. Some of our stories include affiliate links. If you buy something through one of these links, we may earn an affiliate commission.