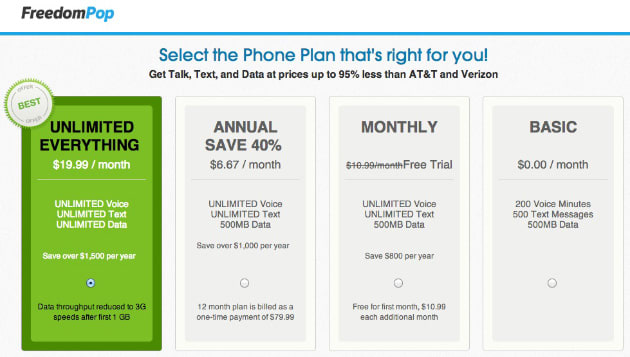 FreedomPop's been signing up customers with the promise of free mobile phone service since last year, but once you're hooked, you'll need to shell out a bit of dough to keep things going. The basic plan, which does in fact come with a $0.00 monthly fee, gets you 200 minutes, 500 text messages and 500 megs of data. Once you reach those caps, you'll pay one cent per minute or 2.5 cents per MB, or you can step up to the new "Unlimited Everything" plan, which will run you $20 monthly for all-you-can-eat voice, text messages and data, with a catch: You'll only get 1GB of LTE, after which you'll drop down to Sprint's 3G network. Assuming you'll consume that gig of data in far less than 30 days, FreedomPop's four LTE smartphones, including three from Samsung and Apple's iPhone 5, may not be the best fit. Still, $20 is a relative steal for unlimited smartphone service, and if you can live with 3G speeds after that first gig is up, FreedomPop's ready to start saving you cash.

Via: CNET
Source: FreedomPop
In this article: 3g, 4g, carrier, carriers, cellphone, free, freedompop, lte, service, sprint
All products recommended by Engadget are selected by our editorial team, independent of our parent company. Some of our stories include affiliate links. If you buy something through one of these links, we may earn an affiliate commission.