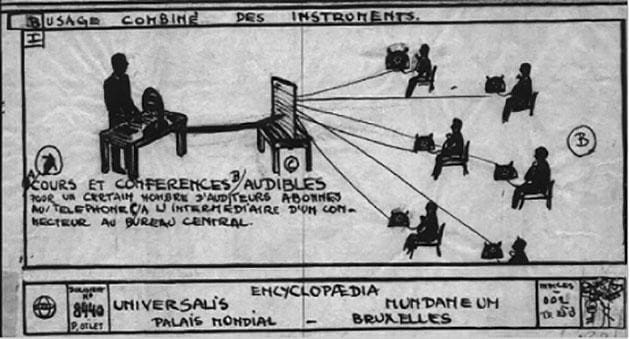 Though we're pretty sure that time travelers don't exist, people were working on hypertext -- used by web browsers to retrieve connected information -- long before computers. It even predates the ideas of a certain Vannevar Bush, the man generally acknowledged as having laid the groundwork for hypertext by microfiche in a seminal 1945 article. Nope, according to the Atlantic, some people were pondering ways of storing and retrieving information prior even to the 20th century. A Belgian genius called Paul Otlet posited an idea in 1895 about "universal libraries" to give anyone access to a vast number of books. By 1934 he had refined it to "electronic telescopes" that would connect people instantly to books, films, audio recordings and photos.

We take that for granted nowadays, of course, but few were considering such ideas back then. Otlet joined forces with radical thinkers like Nobel prize winner Henry LaFontaine and architectural genius Le Courbusier to design a global newspaper archive, networked associations and a 150-room museum. Though those ideas remained a pipe dream, at one point they actually provided a service where you could submit a question and get an answer by telegraph (for a fee). Otlet's ultimate goal was a system where "from a distance, everyone will be able to read text, enlarged and limited to the desired subject, projected on an individual screen." That foreshadowed the modern internet, something even Vannevar Bush never saw coming. Unfortunately, Otlet's vision was shattered by the Nazi invasion of Belgium in 1940, and he died soon after. Luckily, he's now getting some credit for those ideas, and his fascinating story is worth a longer read.

In this article: history, hypertext, information, otlet, storage
All products recommended by Engadget are selected by our editorial team, independent of our parent company. Some of our stories include affiliate links. If you buy something through one of these links, we may earn an affiliate commission.