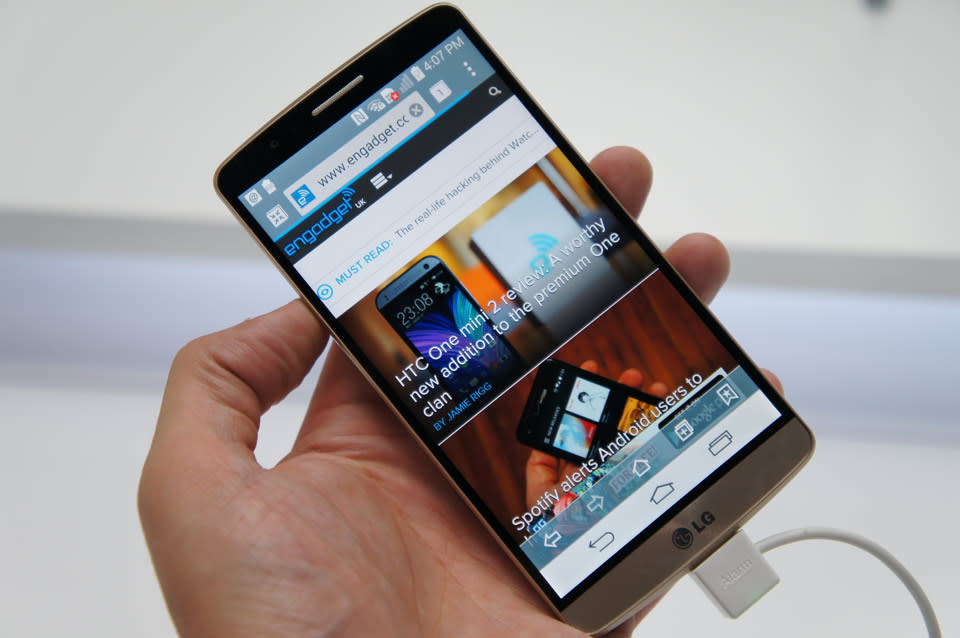 Simple is the new smart. That's how the invite to today's LG event in London reads. But what's simple about the newly announced LG G3 flagship LTE phone? We'll decode the marketing talk soon, but for now lets look at the simple facts about the hardware. As suspected (and oft leaked), the G3 has a 5.5-inch display, again with a much-talked-about Quad HD (2,560 x 1,440) display. As for the innards, there's a Snapdragon 801 chip clocked at 2.5GHz plus 2GB of RAM to serve you up Android KitKat, along with 16GB of storage. There's also a 3GB/32GB variant if you want to up the ante. Other hardware highlights include a removable (3,000mAh) battery, wireless charging and SD card support. Budding photographers will want to know that the main camera is a 13-megapixel unit, and comes with OIS and tap to focus. And yes, again, as rumored there's the (infrared) laser auto focus -- we'll be exploring that in detail in our review for sure. That's the key spec list, but in this increasingly experiential mobile world, there's a lot more going on than just a laundry list of features, which we got a chance to explore for ourselves.

What about the phone design itself? Well in many ways it feels like a collage of some of its contemporaries/competition. The curved top and bottom edges are reminiscent of the (albeit LG-made) Google Nexus 5 and (to a lesser degree) the OnePlus One. The curved back (which is just 2.75mm at its thinnest/the edges, 8.9mm at its fattest) has a whiff of the HTC One (M8) about it, as does the metallic finish. It's definitely metal-like though, and not actually the cold stuff.

LG describes it as "metallic skin," and it's anti-scratch, but not fully self-healing like we saw on the G Flex. As for choice of colors, you'll be able to pick from metallic black, silk white, shine gold, moon violet and burgundy red at launch. It's not all about aesthetics though, as the G3's finish has been designed to be less slippery, and less prone to fingerprint-hoarding than the G2, and that seems to definitely be the case in our initial time with the device. But, why not go with actual aluminum? LG says the material was designed to look and feel like metal, but not be as cold. That's a shame as it's that cooler temperature that many might think actually gives metal phones that quality feel (even if it's mostly because of that sensory distinction from polycarbonate). Either way, the G3 still feels nice, and remarkably doesn't feel as big as the spec sheet tells us it is, until you directly compare it to a smaller phone. What about those rear buttons? We're glad to confirm they're an improvement on the G2's. These very same buttons were one of the stand-out design features last time of course, and LG thinks they were worthy enough for a return visit. On the G3, though, the center button lays much flatter, and protrudes less than on the G2. It makes for a more comfortable fit when in the hand or resting on the table, especially given the phone's size. So, maybe if you weren't a fan last time, they might be more to your liking. That's the theory at least.

As for the "simple" part? As usual, that's mostly in reference to the user interface. It's a common theme, but LG really does think it's made things simpler to use with the G3. It's done this by doing some digital housekeeping. LG's tried hard to remove as much friction between you deciding what you want to do, and actually getting there. In reality, this means the camera interface has been pared right back. It's almost empty; just tap the screen and it'll take a picture. If that freaks you out, you can switch the menu options all back on again, but for the most part, LG's trying to keep things simple. The camera has a few other tricks too, such as gesture controls that solve one of the biggest problems faced by the selfie-taker. Hold the phone at arm's length and instead of fumbling for the shutter button, you can just get your hand in view, make a fist and it'll countdown from three to one before taking a picture. Oh, and that front-facing camera? LG's just gone right ahead and re-branded it the "Selfie camera." It's even been optimized to better perform the task it's become most known for. This means bigger pixels to increase the amount of light it soaks up, and a low f-stop for the same reason (f/2.0 for those that like to know). LG's clearly assuming you hang about in dark places.

Other UI tweaks that LG hopes will reduce the amount of friction include a Google Now-esque smart-notification system. Smart Notice will gently remind you if you didn't return a missed call (and sent a message saying you would,) or suggest you add a number to your contacts that you often get calls from. Best of all? It'll also hint that you should upgrade when LG's got a new product you might be interested in. Fun. We just hope you can turn that off. So far, it seems the G3 is off to a good start, but we're waiting for the company to confirm worldwide price and availability. What we do know is that it'll be landing in Korea first, possibly as soon as next week, with Western markets to follow.

In this article: hands-on, lg, lgg3, mobilepostcross
All products recommended by Engadget are selected by our editorial team, independent of our parent company. Some of our stories include affiliate links. If you buy something through one of these links, we may earn an affiliate commission.