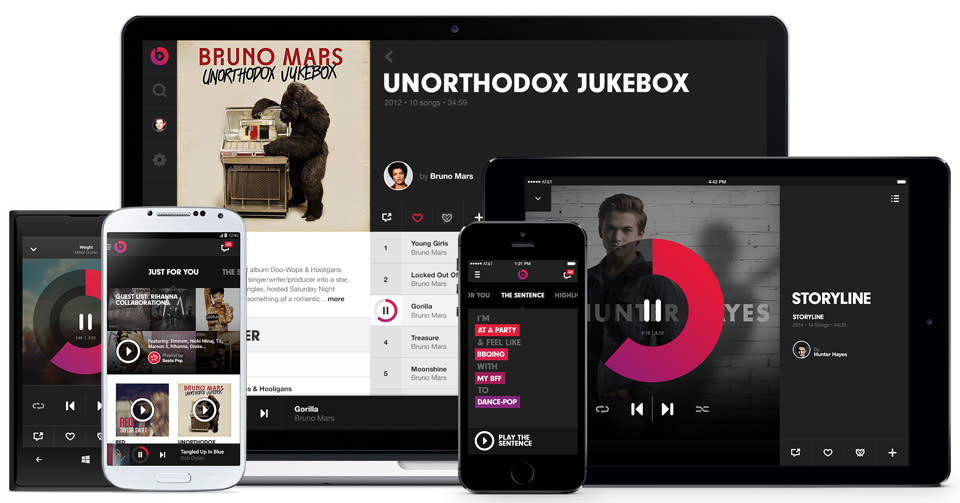 So the Apple/Beats deal is done. But, what most people really want to know is "why?" We got an official answer surprisingly quickly. But, let's face it: Of course the execs are going to wax lyrical about how important music is to the brand and spew other such meaningless soundbites. The only reason a company buys another is to make more money. That could simply be through acquiring a profitable company, which Beats is believed to be by most estimations (if we consider the hardware and streaming entities as one). The bigger question is, with music streaming still largely unproven as a revenue stream, has Apple bought itself an expensive lesson in business?

When Rdio's then-CEO Drew Larner told NPR his firm "will absolutely be profitable" once it gets to 25 million to 30 million subscribers, we got a small insight into the inner workings of your average music-streaming service. Larner actually added "wildly profitable," suggesting the real figure to turn a profit is somewhere south of that.

We don't know Rdio's current subscriber numbers, but we do have a fairly good idea about Beats Music, if a recently leaked document is to be believed. As of March of this year, Beats Music only had around 110,000 paying subscribers. Although recent claims are more optimistic, putting that figure at around 250,000. Going by the current monthly subscription costs for regular and "Family" accounts, at best those 110,000 users would have been generating $16 million a year in revenue. That'd take a fair while for Apple to see a return on its investment if music streaming was its primary focus. This is the best-case scenario, as none of this accounts for the fact that many of those Family subscriptions are likely taking advantage of AT&T's 90-day free trial. Competition in this market is tough, and thanks to the multitude of different approaches, it's nigh on impossible to make direct comparisons. What we do know, however, is that music streaming is on the rise (up 32 percent between 2012/2013). Music downloading (purchasing), on the other hand, actually declined to the tune of 6 percent over the same period. The uptick in streaming fits with the latest figures from Pandora and Spotify, which both claim a continued growth in users (75 million and 40 million, respectively, a quarter of Spotify's being paying subscribers).

As for actually selling music, that isn't something Apple struggles to do. Not too long ago, Apple claimed 15,000 tracks a minute were being downloaded through iTunes. Even a 6 percent drop in that figure still makes for an impressive number. It's likely Apple hoped to balance out that small decline with iTunes Radio and its "listen free, but buy if you like" model. But that doesn't appear to be working -- no matter how close it puts that purchase button to the play icon -- if recent reports are to be believed. The question, then, is: Will Apple merge iTunes Radio and Beats Music together in the hope that it can increase those conversions? Or will it axe iTunes Radio completely, installing Beats in its wake? A drastic measure perhaps, but with a reported 40 million users on iTunes Radio, if it can get even a fraction of those committed to Beats' paid platform (no ad-supported option exists), then it certainly stands to make more than our estimated $16 million best-case scenario. If Apple could get 10 percent of its iTunes Radio users to sign up with Beats Music, then the numbers suddenly look a lot more promising. If it can convince just 4 million users to pay $10 a month, that annual subscription revenue jumps to a much healthier $480 million.

The same site that leaked Beats' subscriber figures also points to another interesting figure -- the low amount of royalties that Beats pays to songwriters (approximately $0.000126 per play). Beats has previously stated that its strategy is to make sure content owners get a good deal and to work with them more closely than other services. So, in many cases that content owner could well be the songwriter. But, this is, perhaps, a good indicator of where the purchase of Beats Music offers its best return, and where Beats co-founder Jimmy Iovine's reported industry sway could really pay off. Has it paid off to the tune of $3 billion? Well, that's the million (billion?) dollar question.

In this article: apple, beats, beats music
All products recommended by Engadget are selected by our editorial team, independent of our parent company. Some of our stories include affiliate links. If you buy something through one of these links, we may earn an affiliate commission.