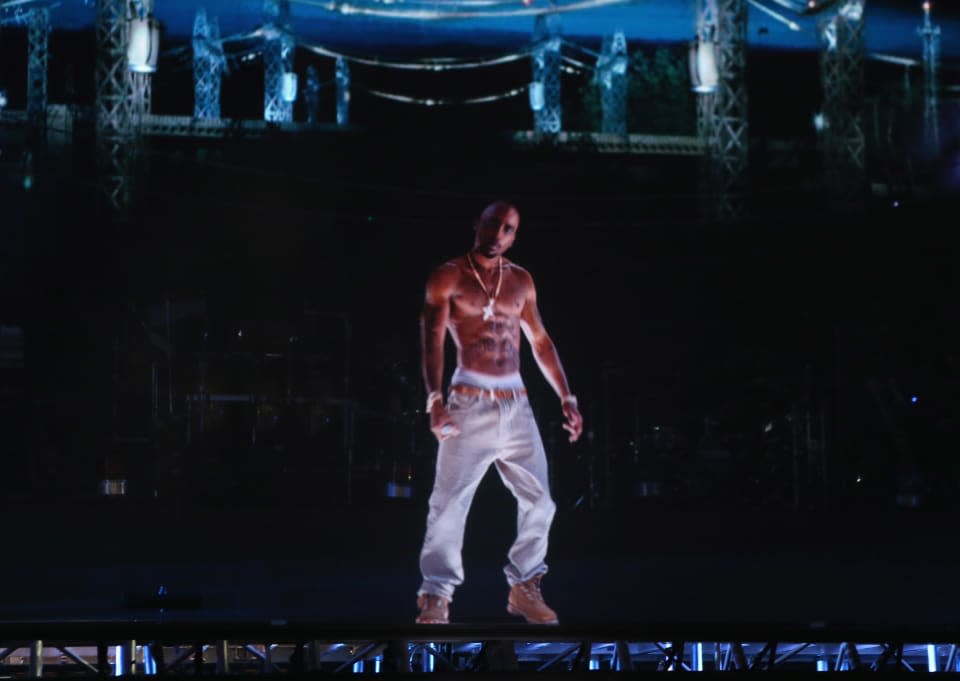 Perhaps you watched the Billboard Music Awards and were aghast (or impressed) by Michael Jackson's performance from beyond the grave. Or maybe you were at Coachella and caught a resurrected Tupac onstage with real-life Snoop Dogg. Hell, let's say you were wooed by India's Narendra Modi in his recent holographic stump speeches. Maybe none of the above? Well, either way, here's a bit of disappointing news: None of those were true holograms, despite our dreams of a sci-fi future. The aforementioned performances are a product of a centuries-old technique called "Pepper's Ghost." You might've seen this on a pretty grand scale during a family vacation to Disneyland, too. The park's Haunted Mansion ride uses it extensively, especially during the ballroom scene where "ghosts" are dancing all over the place. The key difference between what we're seeing now and what's been used for the past few hundred years? The tech being used has gotten much more advanced.

Before we get into what this spate of digital resurrections is, let's start with what this technique isn't: an honest-to-goodness hologram, the likes of Princess Leia pleading for Obi-Wan's help. Holograms use an array of lights to project a 3D image that's viewable from all sides. What we're seeing now is more of a parlor trick involving some figurative smoke and literal mirrors. Why it seems that no one much cared about any of this before the dead were involved, though, isn't exactly clear -- especially when one of the key companies behind the recent craze, Dimensional Studios, is responsible for basically all of the performances you're familiar with. Its work dates back to Madonna performing with Gorillaz at the Grammy awards in 2006, and Al Gore speaking in Tokyo at 2007's Live Earth concert.

The holographic people we've seen are based off of an illusion called "Pepper's Ghost," developed by Henry Dircks and John Pepper in 1863. The concept requires two rooms, some specifically placed glass and carefully controlled lighting. A room adjacent to the viewing area (or stage) is set up as a mirror-image of the area the audience sees; if there's a chair on the right of the stage, it's on the left in the other room. The key difference is that other room is either painted black or entirely unlit, so as not to cast any unwanted reflections that would break the suspension of disbelief. That room is where the performer resides. The stage area must be brightly lit at first for the whole thing to work. Then, the stage's lights are dimmed slightly and the lights are raised in the mirror-image room, which causes the not-physical performer to appear.

Whereas applications of yore relied on physical objects like animatronics or human beings, modern takes are a bit different. Tupac's Coachella performance and the King of Pop's appearance at the Billboard awards, for example, were based on meticulously detailed computer-generated models. In the case of Modi, his avatar was the result of HD video capture. As one aspect of the tech progresses, so does another. Instead of glass, the performances you're probably most familiar with rely on something called a Musion Eyeliner 3D setup, which utilizes a digital light processing projector (DLP) -- like what's used in movie theaters -- to beam an image onto a type of reflective, metallic screen instead of melted sand.

Because of that, the modern setup requires only one room: the stage. Typically, it involves the Musion screen to be at a 45-degree angle with the projector residing beneath the stage, pointing and projecting upward. For the Jackson performance, however, it was a bit different. Six projectors threw the King of Pop's video on a rear-projection screen hanging above the stage. The angled Musion screen picked that projection up, and from the audience's perspective, he appeared at the back of the stage. Careful placement of dancers and band members added to the illusion of depth and dimension. Well, for starters, this could mean seeing a speaker wherever you might live, regardless of what their respective tour circuit is (or if they're still living and breathing). As the technology progresses, this sort of thing could happen right in your living room and you could have a real-time conversation with friends or loved ones from around the world. If you aren't cool with using Skype to video chat with mom back home, though, this might not be any more comfortable.

There's a murky side to all of this, though. In the case of the deceased, how comfortable are we seeing the dead being paraded out to shill products posthumously? This takes something like the Paula Abdul and Gene Kelley Diet Coke commercial from the early '90s to a new level (see that madness below).

There's also an issue involving the uncanny valley: when artificial human features just miss the mark of an accurate recreation and come off as inherently creepy. Some have said that in the YouTube videos of the Jackson and Tupac performances, something is slightly off. The movements are a little too smooth and fluid, and appear artificial as a result. This isn't limited to digital recreations either; Modi looks a bit artificial in his simulcast speech too, as if he's suffering from the "soap opera effect" seen on some HDTVs (moving just a bit too perfectly).

Also, what's to stop the less-than-savory from recreating one of history's most influential speakers (and greatest monsters), Adolf Hitler, to lead a new genocidal army? To be sure, there's a possible dark side to any form of technology, but the implications of this are a touch more terrifying than some others.

Of course you do! USA Today recently sat down with the team behind MJ's posthumous performance and got them to dish their secrets; they even cried during the show, apparently. If you're more of a rap fan, Ars Technica poked and prodded academics about Tupac's Coachella gig a few years back. Fancy setting up a low-fi ghostly illusion on your own? Let the folks at Make show you how its done -- it's never too early to start planning for Halloween.

In this article: dlp, explainer, gorillaz, madonna, MichaelJackson, MusionEyelinerSystem, narendra modi, NarendraModi, peppersghost, tupac shakur
All products recommended by Engadget are selected by our editorial team, independent of our parent company. Some of our stories include affiliate links. If you buy something through one of these links, we may earn an affiliate commission.