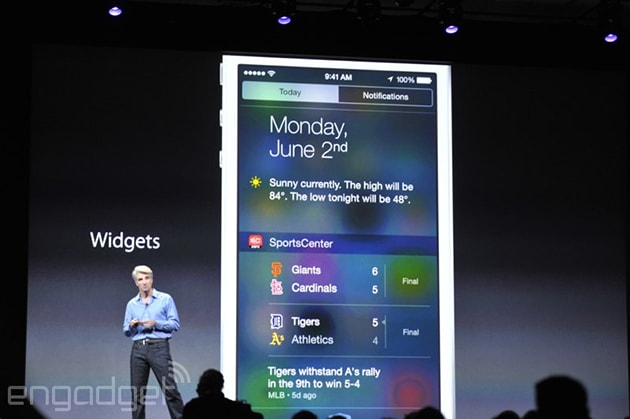 It's been a long time coming, but Apple is finally adding support for widgets to iOS. On stage at its Worldwide Developers Conference, the company's Senior VP of Software Engineering, Craig Federighi, revealed that devs can now start building widgets within the Notification Center on iOS 8. Unlike Google's take on widgets with Android, Apple's equivalent won't have them living on the home screen of your smartphone or tablet. Instead, iOS widgets will share the drop-down hub with app notifications. Still, there's a lot of potential here, as it's going to let those of you with an iOS device have more interactivity and quick access to your favorite applications. iOS 8 will be available this fall.

In this article: Apple, iOS, iOS 8, iOS Widgets, iOS8, mobilepostcross, Notification Center, NotificationCenter, Widgets, WWDC, WWDC 2014, WWDC2014
All products recommended by Engadget are selected by our editorial team, independent of our parent company. Some of our stories include affiliate links. If you buy something through one of these links, we may earn an affiliate commission.