CreoPop lets you draw in three dimensions without that plastic smell 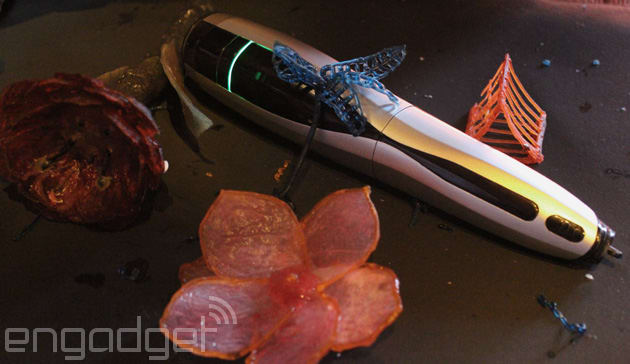 First TVs, then printers -- now even pens are producing content in 3D. It's truly a mad world, but at least our universe is still ripe for innovation. Introducing the CreoPop 3D Pen, a wieldable printing device that can "draw" objects into existence. It's not the first 3D pen we've come across (that honor goes to the WobbleWorks 3Doodler), but it is the first one we can't compare to a hot glue gun.

Unlike WobbleWorks' printing implement, CreoPop's medium isn't melted plastic -- it's what the company calls "Cool Ink," a fast-curing resin that hardens when exposed to UV light. The company claims this makes the CreoPop the first 3D Pen (not that there are that many) that doesn't rely on melting plastics to create objects. 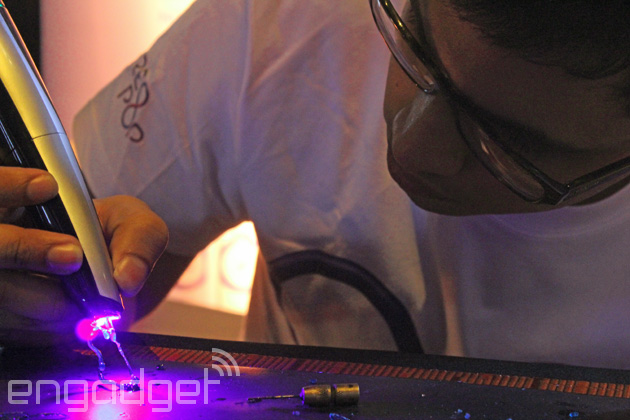 These so-called inks have other advantages too -- they can glow in the dark, or react to temperatures. CreoPop's Andreas Birnik told us that the company is creating elastic, conductive, magnetic and even body-friendly inks for creating henna-like tattoos. That said, it's still pretty difficult to use: we gave the pen a spin at a recent San Francisco event and found drawing in 3D to be as challenging as ever. The prototype we used also seemed to clog easily, as the UV light its tip would harden the extruding material a little too quickly. Birnik told us that it would be further refined in the coming months, explaining that the project would be launching on Indiegogo before the end of June. The cost of doodling in three dimensions? $89 for backers -- but folks who sign up on the company's website can lock in a lower, early-bird price.

Source: CreoPop
In this article: 3dpen, 3dprinting, creopop, hands-on, Indiegogo, printing, Ultraviolet, uv, video
All products recommended by Engadget are selected by our editorial team, independent of our parent company. Some of our stories include affiliate links. If you buy something through one of these links, we may earn an affiliate commission.