Ads in Instagram Stories are about to get worse

Even Skype is copying Snapchat

Disappearing videos are coming to a Bumble profile near you 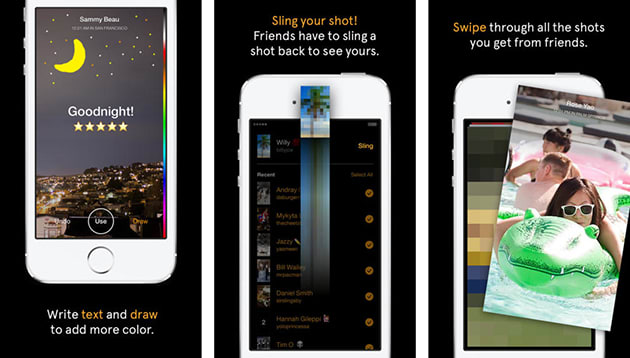 The rumors are true: Facebook has indeed been working on a Snapchat competitor called Slingshot, and true to its ephemeral nature, it showed up ever so briefly on the App Store today before it was taken down. Prior to that though, we managed to glean enough information from the app description to get a few hints as to how it works. Similar to Snapchat, you can send photos and videos to friends, and once they view them, those messages will disappear. You're even able to add captions and scribblings on them just like Snapchat. But the key differentiator between Slingshot and other ephemeral messaging apps is that before your friends can see your missives, they must reciprocate and "sling" something back. After receiving your message, they can either tap to react to it or swipe it to remove it for good.

We've since received a confirmation message from a Facebook spokesperson that simply states: "Earlier today, we accidentally released a version of Slingshot, a new app we're working on. With Slingshot, you'll be able to share everyday moments with lots of people at once. It'll be ready soon and we're excited for you to try it out." Though it isn't clear, it seems that Slingshot could be the latest project from Creative Labs, the same team that brought us Paper, Facebook's dedicated news-reading app. This arrives a month or so after Facebook sunsetted its Poke app, which was supposed to be an earlier attempt at a Snapchat challenger.

Source: TechCrunch
In this article: ephemeralmessaging, facebook, mobilepostcross, slingshot, snapchat
All products recommended by Engadget are selected by our editorial team, independent of our parent company. Some of our stories include affiliate links. If you buy something through one of these links, we may earn an affiliate commission.