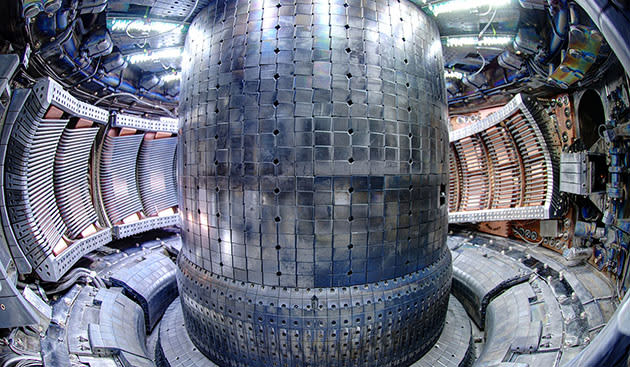 Nuclear fusion is the holy grail of scientists (and politicians) as it could produce limitless free energy without nasty consequences like meltdowns and radioactive waste. Though nobody's been able to build a reactor that produces more energy than it consumes (except arguably one time), scientists are still trying, with three experimental reactors currently in operation in the US. One of those, however, has been in the Obama administration's cross-hairs: MIT's Alcator C-Mod reactor. The White House decided to chop that program back in 2012, calling it too small, outdated and a vanity program for MIT, according to the Boston Globe.

Instead, the White House wanted to divert funds to the promising ITER tokamak fusion reactor. Though located in France, US researchers would have a direct line to the massive project, which aims to help transition fusion from the experimental phase to a practical reactor. Once MIT found out that its own reactor would be cut, however, it mobilized its lobbying arm, and convinced local congressman Michael Capuano that it was worth saving. He recruited a group including Senator Elizabeth Warren, which pitched other other representatives on the merits of the project. They emphasized the patriotic angle by showing a map with hundreds of subcontractors in 47 of 50 states which supplied the project.

In the end, the Senate decided to throw $22 million MIT's way to keep the project alive until 2016, while chopping ITER funding by $25 million. One skeptic pointed out that such funds would be used by MIT for a five week experiment by 12 graduate students. "This would be $1.5 million per student." Still, the reactor has now been re-started with a ceremonial button push by Senator Warren -- check out the entire saga at the Globe right here.

Source: Boston Globe
In this article: AlcatorC-Mod, fusion, MIT, Plasma, reactor, TL16NuPwr
All products recommended by Engadget are selected by our editorial team, independent of our parent company. Some of our stories include affiliate links. If you buy something through one of these links, we may earn an affiliate commission.