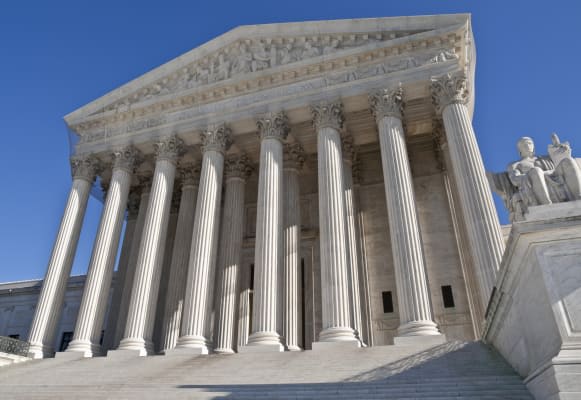 We're still waiting to see what the Supreme Court has to say about Aereo and warrantless cellphone searches, but in the meantime there are more cases to be heard! Including Anthony Elonis v. United States, which the highest court in the nation just agreed to hear. The decision will end up setting a precedent for when violent comments made online cross from protected speech to criminal threats. In 2011, Elonis was sentenced to nearly four years in jail for posting status updates and self-penned lyrics on his Facebook page wishing death on his wife, the police and others.

The story really begins back in 2010, when Elonis' wife left him, taking their two children with her. Around the same time, he lost his job at an amusement park in Allentown, Pennsylvania. His Facebook wall quickly filled with angry updates, some of which painted vivid pictures of the violence he hoped would befall his estranged wife and coworkers. Many of the rather dark posts took the form of raps that Elonis wrote, which he claims were therapeutic and not meant as legitimate threats. His wife however, was uncomfortable about his public professions that his son should "dress up as matricide for Halloween" She obtained a protection from abuse order against him, but this only seemed to fuel his rage.

It wasn't long after that the FBI caught wind of Elonis' posts. He was visited by an agent, but not arrested initially. When following that meeting he posted lyrics detailing a fantasy in which he slit his wife's throat, the agency decided it had seen enough and took Elonis in to custody.

Now the Supreme Court will have to decide whether or not the Facebook postings crossed a line. The normal standard set for such cases is whether or not a "reasonable person" would feel threatened by the actions. But Elonis' attorneys argue that isn't appropriate given the venue for the missives. The defendant's wife isn't his friend on Facebook and he did not send menacing messages to her directly; instead he posted them publicly on his own wall. Essentially, he never meant for her to see what he wrote, and those who saw his words might misinterpret them because they didn't know him personally. The government's counter argument is that the law is designed to prevent not just physical violence, but also the anguish that perceived threats can cause. Elonis' conviction has been upheld twice, and regardless of how the court finds, the decision will have widespread implications for free speech, cyber bullying and the internet in general.

Via: The Verge
Source: USA Today, Supreme Court of the United States
In this article: facebook, impressions, preview, social media, social networking, supreme court, threat
All products recommended by Engadget are selected by our editorial team, independent of our parent company. Some of our stories include affiliate links. If you buy something through one of these links, we may earn an affiliate commission.