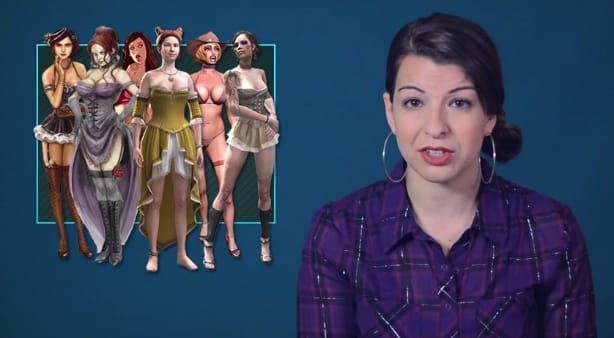 Feminist Frequency founder Anita Sarkeesian has launched the first video in her "Women as Background Decoration" series, dissecting how women are portrayed as non-playable sex objects in video games and the real-world effects these images have on players. Women as Background Decoration is the second series in Sarkeesian's Tropes vs. Women video campaign, which raised $158,922 on Kickstarter in 2012.

In part one, Sarkeesian breaks down how women are hyper-sexualized and transformed into objects in many games, allowing players to use, abuse and dispose of female sex workers as if they were things, rather than people. She covers series such as Grand Theft Auto, Fable, Fallout, Sleeping Dogs, Watch Dogs, Hitman, Red Dead Redemption, Duke Nukem, Dishonored and The Godfather.

"These games systematize sexuality in ways that dehumanize women, essentially turning them into vending machines dispensing sex, along with other goods and services. Their worth as characters is measured entirely in terms of what they can give to the player .... When men are depicted using female NPCs as tools or commodities, their actions are portrayed as part of what makes them powerful, which is by extension part of what makes the player then feel powerful."

Sarkeesian acknowledges the rare instance of a male sexualized character, and that much of the violence (non-sexual, at least) enacted against female characters also applies to male characters in the same game.

"But even if sexualized male NPCs were more prevalent, equal opportunity sexual objectification is still not the solution to this problem, especially considering the existing power differential between men and women in our society," she says. "Women are constantly represented as primarily for sex. Men may be sexual too, but they can also be anything else, they are not defined by or reduced to their sexuality and their sexuality is not thought of as something existing chiefly for the pleasure of others."

These acts of sexual violence and objectification against women have real-world effects on both male and female players, Sarkeesian says. She notes that extensive research consistently finds that women internalize these images and self-objectify, sometimes leading to eating disorders, depression, low self-worth, body shame and body monitoring. Men exposed to these images tend to view women as less intelligent and competent, she says.

"Researchers have also found that after long-term exposure to hyper-sexualized images, people of all genders tend to be more tolerant of the sexual harassment of women and more readily accept rape myths, including the belief that sexually assaulted women were asking for it, deserved it or are the ones to blame for being victimized," Sarkeesian says.

In line with the #yesallwomen movement, Sarkeesian addresses the "widespread belief" that media exposure has no impact on individual members of the audience:

"While it may be comforting to think we all have a personal force field protecting us from outside influences, this is simply not the case. Scholars sometimes refer to this type of denial as the 'third person effect,' which is the tendency for people to believe that they are personally immune to media's effects even if others may be influenced or manipulated. Paradoxically and somewhat ironically, those who most strongly believe that media is just harmless entertainment are also the ones most likely to uncritically internalize harmful media messages."

Part two in the Women as Background Decoration series will address the exploitation of sexual violence as a plot point in games. See links to some of Sarkeesian's research and related articles here.

[Image: Anita Sarkeesian]
In this article: anita-sarkeesian, feminism, feminist-frequency, kickstarter, tropes-vs-women, tropes-vs-women-in-video-games
All products recommended by Engadget are selected by our editorial team, independent of our parent company. Some of our stories include affiliate links. If you buy something through one of these links, we may earn an affiliate commission.