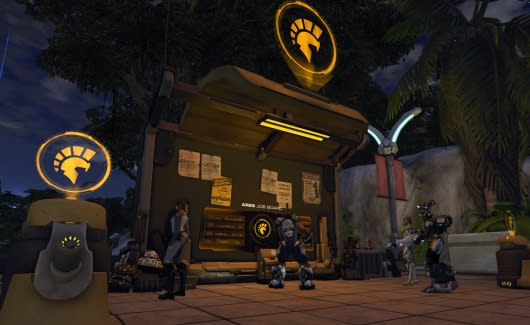 With Firefall's official launch approaching, the devs are in a frenzy proclaiming the new features and systems that players will be seeing when that day arrives. In a new dev diary today, the team highlighted a personalized mission maker, called ARES.

ARES Jobs allow players to create and launch dynamically generated quests during downtime. Players can choose from several story and gameplay options, and the system will pull together a mission that can be completed solo in the game world. The devs promise that ARES jobs will keep mixing it up with objectives and locations to avoid any danger of the missions growing stale. There are reportedly "hundreds" of jobs, and if a player so desires, he or she could level up exclusively through ARES.

"ARES jobs also help to make the world feel more alive: in the current system, it is rare that you run into another player in the world by random chance," the devs wrote. "ARES missions take place in a number of predetermined locations, and dynamic events like tornados or crashed thumpers draw players to them in a predictable manner."
Source: ARES Job Boards
Coverage: Firefall
In this article: ares, ares-jobs, ares-missions, beta, dev-blog, dev-diary, f2p, firefall, fps, free-to-play, mmo-shooter, personalized-missions, pvp, red-5, red-5-studios, sci-fi, shooter, third-person-shooter, war
All products recommended by Engadget are selected by our editorial team, independent of our parent company. Some of our stories include affiliate links. If you buy something through one of these links, we may earn an affiliate commission.