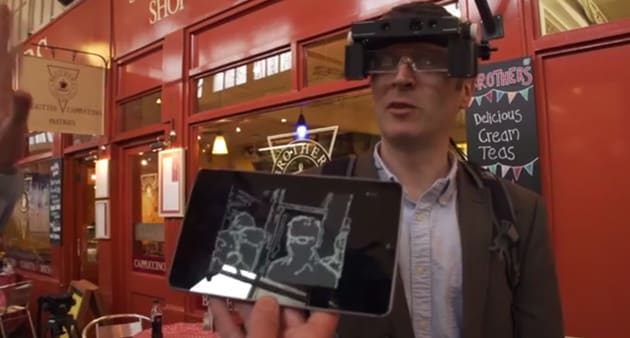 When we hear the term "smart glasses" these days, we tend to focus more on the smart and less on the glasses. Researchers at Oxford University see things the other way around: putting the emphasis on glasses suggests a device that helps the visually impaired see the world, not augment it. This is the project Dr. Stephen Hicks of the Nullfield Department of Clinical Neurosciences at the University of Oxford has been working on: a wearable designed to give folks with partial vision a clearer view of their surroundings. It's not as flashy as Google Glass, but it has the potential to change lives. It's also being tested in the wild.

Hicks' early prototypes show a lot of promise. Test users with partial vision are treated to a high contrast view of nearby objects. "The idea of the smart glasses is to give people with poor vision an aid that boosts their awareness of what's around them," Hicks says. It's not a cure for sight loss, but test users say the system helps to add context to their surroundings, and makes the most of their existing vision.

Unfortunately, the University's current rigs are somewhat bulky -- cramming a pocket-sized computer, Epson Moverio-sourced optics and a head-mounted motion camera into a single wearable -- but Hicks says the unit will eventually "look like a regular pair of glasses." The final unit may also have audio feedback as well as face and text recognition features, but the University is waiting for additional funding before tinkering with new features. Right now the goal is simply to make it small and affordable: if everything goes to plan, Oxford's smart glasses shouldn't cost any more than a regular smartphone. Check out the smart spectacles in action in the video below.

Via: BBC
Source: Oxford University
In this article: glasses, Oxford, Oxford University, OxfordUniversityPress, smartglasses, vision, wearables
All products recommended by Engadget are selected by our editorial team, independent of our parent company. Some of our stories include affiliate links. If you buy something through one of these links, we may earn an affiliate commission.