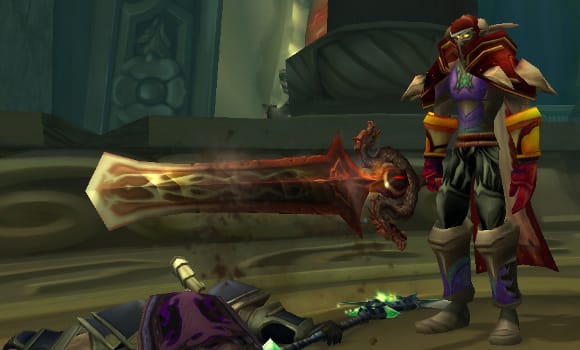 The beautiful thing about twitter is how it can engender conversations you might never get to have otherwise. Last night (thanks to my perpetual insomnia) I was up and scanning when Bashiok made a series of tweets I just had to respond to.

It's crazy how much more complex and difficult fights are now, and how much better we are as gamers.


What I really took away from this discussion is, frankly, just how difficult it is to compare the difficulty of WoW's vanilla epoch and today's raiding (and raiding to come). There are at least two kinds of difficulty to discuss, when talking about raiding difficulty - the difficulty of putting together and keeping a raiding group going, and the difficulty of actually executing the content. These are wildly disparate.

To put it mildly, it is vastly and amazingly different to put together a group and raid in the modern game, and with Warlords of Draenor it will remain so. The highest difficulty setting, mythic raiding, will require 20 players, and for all other forms of raiding you can either solo queue (LFR) or assemble a group that scales between 10 and 25 players. This is frankly almost infinitely easier than in the days of Vanilla, where the most difficult content required a static 40 player raid group, and also had many more hoops to jump through (attunements, resist gear farming, bosses that had to be defeated to get drops to even consider killing other bosses - getting an entire raid a cloak made from Onyxia's scales took weeks and weeks and weeks of killing her, to the point where some raids started breaking up into 20 player groups to speed the process) in order to get to the content. There can be no disputing this - vanilla WoW was in many ways a lot harder to play, not because of complex and engaging mechanics, but because of all the things you had to go to even get in the door to see those mechanics.

This is simply how the game was. There was no alternative - there were two raids introduced in vanilla that weren't 40 player, Zul'Gurub and Ruins of Ahn'Qiraj - both at the time had a 20 player cap. They also rewarded gear that varied from slightly better than Upper Blackrock Spire to on par with Molten Core. This meant that they were, for most raiding groups, side progress - you'd run them after your main raid if you were going to be up and bored. My guild at the time ran ZG as a kind of drunken romp, with MC/BWL geared players paying barely any attention, holy paladin tanks, a resto shaman as our DPS lead.

The game was so different then it's almost impossible to convey it, really. Spending hours getting people attuned to Onyxia just so you could get them capes to run Nefarian was something we did - it seems ludicrous now, but it was part of the game, and if you wanted to play it at the highest possible level of content progression, you did it, or you didn't play that content. Period. There was no alternative to it - no scaling raid sizes, and very little option. So on that front, yes, it's absolutely the case that Vanilla WoW was far more difficult - because it required hours and hours and hours of time to get to even see these raids.

Mechanically, however, the difficulty has only gone up as the accessibility has. Even LFR has mechanics that would have only been seen on the end bosses of raids. Consider this - original Ragnaros in Molten Core was a very difficult boss when he first appeared, but not because of the mechanics - it was a simple fight, knockback, submerge and kill adds, rinse and repeat. The difficulty of the fight came in putting out the damage needed to do it while wearing fire resist gear, keeping the tanks up and in range (tanks had to learn how to avoid that knockback or how to get knocked back into one of the stone outcroppings and avoid going airborne) and how to deal with the sons. And that was it. Compare that to Paragons of the Klaxxi. There's simply no contest. Even the hardest boss in the game in vanilla, Kel'Thuzad, wasn't as ridiculous as that fight.

It's worth keeping this in mind when discussing how difficult WoW is now compared to how difficult it was then - how, exactly, are you measuring difficulty? Bashiok's later point about the time commitment in original WoW is spot on - raiding in a guild that was at or near the top in terms of progression on my server in those days was almost a job. We actually lost our raid leader in mid raid one night, he simply snapped and stopped playing, quit the game, just from the stress of keeping 39 other cats herded all raid week. So while mechanically, I don't think you can argue that raids were harder in vanilla, you absolutely can say that it was harder to get to raid back then.

In this article: classic, classic-WoW, raid-difficulty, raiding, raids, vanilla, Vanilla-WoW
All products recommended by Engadget are selected by our editorial team, independent of our parent company. Some of our stories include affiliate links. If you buy something through one of these links, we may earn an affiliate commission.