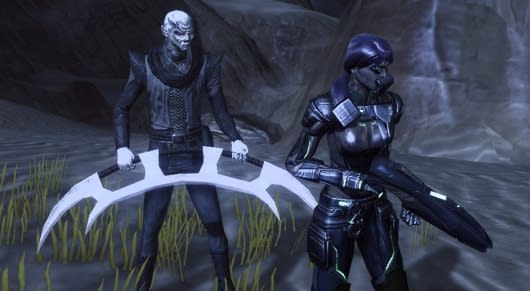 The first expansion to Star Trek Online was the expansion everyone expected and yet one that no one really expected. Romulans were the obvious choice, the big gap in the game's factional lineup, the third major power that had been floating around in the darkness like some vast, predatory bird since the original series. But the idea of seeing a new faction after the Klingons had languished for so long seemed like a pipe dream. When it actually happened, I know I was sort of left just staring and disbelieving.

Of course, now we've had the Romulan Republic as a playable sort-of-faction for a year now, and that prompts all sorts of reactions. In many ways, this expansion is better than we could have hoped for, and in other ways it feels as if it kind of falls short. I come here not to praise or to bury Legacy of Romulus but to look at it a year out from launch and perhaps see what lessons could be gleaned for the expansion we're due to receive late this year.

Let me start by saying that Legacy of Romulus occupies an unsteady middle ground. In one way it's the most true-to-source thing you could hope for from Star Trek Online, but in another way it's entirely wrong.

Positive first: The idea of having the Romulans band together and join up with the Federation or the Empire after the destruction of Romulus is one of the most perfect ideas ever. Here's a franchise based around the idea that with understanding and compassion we can overcome our differences. While the Federation and the Klingon Empire have gone back and forth between friendship and animosity, the Romulans have always been opponents. The idea that this could change, that these great boogeymen would wind up working with their former enemies, becoming allies brokering peace... it's exactly the change that Spock was working toward, and it's marvelously satisfying to see.

Of course, there's also the fact that it kind of removes some of the fun of playing a Romulan. I mean, that's why we wanted Romulans. The cloak and dagger, the deceit, the sneering sense of superiority -- all of this is part of the allure. By making the Republic the playable faction and pitting characters against the Tal Shiar, some of that menace is gone. You feel less as if you're playing a Romulan and more as if you're playing a Federation crew with pointy ears and more cloaking devices.

Yes, working with the Elachi, and harvesting Borg technology was probably never going to work for a faction; at that point you're into unambiguous evil. But the Republic is just so open and nice that it doesn't quite feel like playing a Romulan, at least not the way we've grown accustomed to. There aren't many hints of that classic nastiness.

In game terms, this is due to the simple reality of balancing the new faction against the old ones, incorporating the third faction as a neutral one with some of its own missions. It's an approach that works reasonably well and helps give everyone something interesting to do through the levels, although the episode progression is still very linear. (You can bypass a lot of it if you really want to, yes.) Romulans don't play very differently on the ground, but the Warbirds are pleasantly different from the other factional ships.

I was initially a bit worried about how the Romulan craft would stack up against other factions, but the lower power levels from Singularity cores work out well. You've got more powers but less power to fuel most of them, so it strikes a nice overall balance. It does sometimes make the early Warbirds feel overpowered, but that balances out over time.

Hitting the level cap, unfortunately, means that most of the differences between your Romulan captain and any other captain kind of erode, right down to still earning up reputation just as everyone else does despite having been kind of important during the Republic's formation. That's down to game mechanics, I know, but the story and the systems don't line up nicely. For all the effort put into making sure that the starting experience was vastly different, the later experiences with Romulan captains feel... well... kind of generic.

That's the odd thing about the expansion as a whole. It added a lot to the bottom but not a whole lot to the top. You've got a new faction and a new experience there, but once you're up at a certain point, it's more of the same. It's a common syndrome for Cryptic's games in general, as seen in years of City of Heroes content before the studio moved on.

So what does all of this mean for the future? First and foremost, it means that I kind of side with the people who say we don't need another faction with the next expansion. It might be sort of nice, but I'd like to see more stuff to do once I hit 50 rather than just get another round of low-level missions followed by characters fading into the same overall progression. The Romulans provided a template for faction additions, but I don't think another one is necessary right now.

It also serves as a lesson about messing with the formula too much. The only hints of old Romulan xenophobia that we see are in how zealously the Solanae sphere is guarded by the Republic, since it's technically theirs by virtue of location. I really like where then faction has wound up, but there's a middle ground between "we're enemies forever" and "we heart the Federation and the Klingons" that is kind of missed. Sure, I dearly want a playable Cardassian faction, but not simply to wind up as an ersatz alien version of a Starfleet captain.

When I want that, I can play the Cardassian captain I already have, see.

Most of all, I think it serves as an indicator that the game needs to look toward the top a little bit more. The game has come a long way since its launch four years ago, and I think it's a much better game overall. Attention has been paid to the top end, and between reputations and adventure zones there's a lot more to do now. But opening up new episodes for high-end captains, maybe even offering branching paths or the like, would do a lot to make the high-level experience feel more distinct.

If you've somehow missed it thus far, it's Lohlunat time, and that means you should already have been picking up your pearls and getting your Risian ships. I can't say much about the powerboard races; I play WildStar, so my opinion about hoverboards is well and truly shaped already. I will say I've been hard at work making sure that all of my alts can unlock their racing ship and yacht as well as idly earning up the favors for a swimsuit. Dance festivals are great.

Worth noting: Two characters can make unlocking the ships for alts a snap, since you can have both of them complete the daily and work toward either the yacht or the corvette separately, at which point the discount unlocks for your account. So it's the long haul for the first two unlocks, and then two days of dailies for everyone else.

We've also been seeing a lot of stuff about season 9.5, specifically crafting updates. That's what I plan to talk about next month, so if you've got thoughts on the update that you'd like to see addressed, please let me know down in the comments or via mail to eliot@massively.com. Until next time!

Space, the final frontier. These are the voyages of the starship Massively, as recorded monthly in Captain's Log by Eliot Lefebvre. Its continuing mission -- to explore strange new game systems in Star Trek Online. To seek out new content and new experiences. To boldly go where many captains may or may not already be going, but they seem to be having fun, right?
In this article: captains-log, cryptic, cryptic-studios, expansion, f2p, factions, featured, free-to-play, game-balance, legacy-of-romulus, lore, opinion, patch, patches, perfect-world, perfect-world-entertainment, progression, pwe, sci-fi, star-trek, star-trek-mmo, star-trek-online, sto, story, update, updates
All products recommended by Engadget are selected by our editorial team, independent of our parent company. Some of our stories include affiliate links. If you buy something through one of these links, we may earn an affiliate commission.