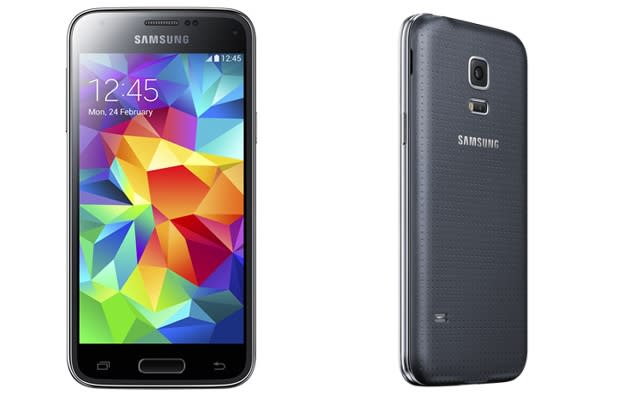 Samsung has revealed the smaller-sized update to its latest flagship smartphone: the Galaxy S5 mini. While it's often expected that the company will scrimp on sensors to save on price, the S5 mini includes many of the same features as its sibling, including waterproof certification, power-saving modes, a heart rate monitor, fingerprint scanner and support for Samsung's wearables. As expected, there's also a 1.4GHz quad-core processor, Android 4.4, 16GB internal memory (expandable up to 64) and 1.5GB of RAM, which match what we've seen in years past. The display is a 4.5-inch Super AMOLED panel, which is powered by a 2,100mAh battery, with the cameras enjoying in 8- and 2.1-megapixel resolutions. The company expects the S5 mini to go on sale in Russia from "early July," but there's no word on when it'll spread to other countries. Samsung plans to expand sales globally, though, offering the device in Charcoal Black, Shimmery White, Electric Blue and Copper Gold.

23
In this article: android, galaxy s5, galaxy s5 mini, galaxys5, galaxys5mini, mobilepostcross, samsung, smartphone
All products recommended by Engadget are selected by our editorial team, independent of our parent company. Some of our stories include affiliate links. If you buy something through one of these links, we may earn an affiliate commission.