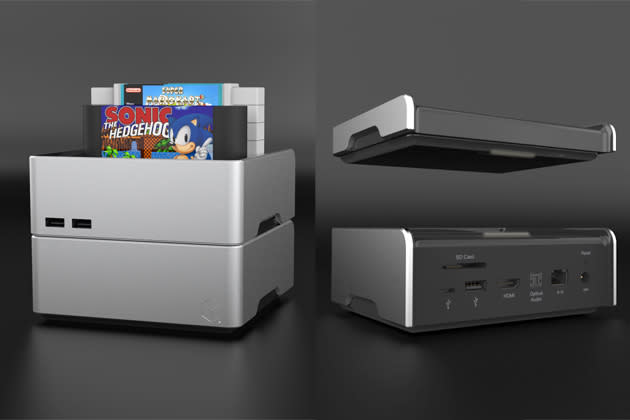 The set-top box market is currently flooded with many cheap Android boxes, but they tend to offer limited remote access plus expansion capability, so it's about time that something more exciting popped up. One such candidate is the EzeeCube, which aims to be an idiot-proof media hub with three main selling points: Auto-sync content across multiple platforms (Android, iOS, Windows and OS X); simple initial setup for accessing hub content from anywhere; and cable-free expansion that lets you stack up to four modules. We're talking about slapping on an extra hard drive, a Blu-ray drive, a TV tuner and even a retro gaming module that will bring your dusty SNES and Sega Mega Drive / Genesis cartridges back to life. No messy cables here. The EzeeCube itself is a 140 x 140 x 45mm box packing a dual-core 1GHz Cortex-A9 processor, 1GB of DDR3 RAM, 4GB of flash storage (for the XBMC 13.1 app running on Linux) and a 2.5-inch 5,400 RPM 1TB hard drive. All the ports are on the back, including an SD card slot, a USB 2.0 socket, a micro-USB port (for OTG accessories and hacking purposes), an HDMI 1.4 port, an optical audio socket and an ethernet port. For networking, you get the usual 802.11n WiFi plus Bluetooth 3.0 for data and device connection, as well as DLNA plus AirPlay for either wired or wireless streaming within your home network. The five pins on the top side are obviously for the stacking expansion, and they supply a total current of up to 5A (hence the maximum limit of four stacking modules).

Since this is an open source product, manufacturers can easily design an EzeeCube module after obtaining a free license (for the sake of enforcing its stacking patent). Ashok Jaiswal, the Hong Kong-based system architect behind this project, expects to see others jump in with Qi wireless charging pads, smart home hubs and more for his little box. As mentioned earlier, Jaiswal's Indiegogo campaign currently offers an optional hard drive module (either empty or with a 2TB drive), a TV tuner and a retro game cartridge module -- which is based on the Retrode USB cartridge adapter -- at relatively affordable prices. The campaign will soon add a Blu-ray module as well, which will let you easily rip your DVDs onto the EzeeCube, in addition to playing Blu-ray movies.

On the software side, the TV interface and the EzeeSync mobile app share the same design language, which should help users quickly familiarize with the system. The relatively straightforward setup process involves the registration of your mobile number, which is later used as your unique ID for remotely and securely accessing your EzeeCube's content. This saves you from having to manually set up UPnP port forwarding, which can be rather daunting for the non-technically minded -- especially Jaiswal's wife and mother-in-law, in this case. Of course, if your mobile device is connected to the same home network as your EzeeCube, then the app will automatically search for the box. At Jaiswal's office, we got to see a working live demo of accessing content on both iOS and Android, as well as viewing photos, video and music on the TV while simultaneously -- and independently -- playing the same content or other content on the mobile devices. The app also serves as a remote control for navigating around the TV interface; you can toggle those buttons by tapping the downward arrow near the top. Sadly, we didn't get to see a working "EzeeGame" cartridge module, as this is a very fresh collaboration with the team behind XBMC's RetroPlayer emulator.

Jaiswal told us that while the software requires further tweaking, the hardware is good to go, so now it's just a matter of getting the funds for the tooling as well as initial production of 500 units. If you're interested in helping the EzeeCube become reality, head over to the Indiegogo page to pick a backing option, and you'll be able to get one for as cheap as $199 due November this year, before it officially rolls out for $299 towards Q2 next year -- just as when the $50 gaming module is ready as well.

In this article: 16-bit, AshokJaiswal, ezeecube, ezeegame, ezeeplay, featured, features, gaming, genesis, hands-on, hdpostcross, hongkong, impressions, indiegogo, megadrive, preview, retro, retrode, retrogaming, settopbox, snes, stb, video, xbmc
All products recommended by Engadget are selected by our editorial team, independent of our parent company. Some of our stories include affiliate links. If you buy something through one of these links, we may earn an affiliate commission.