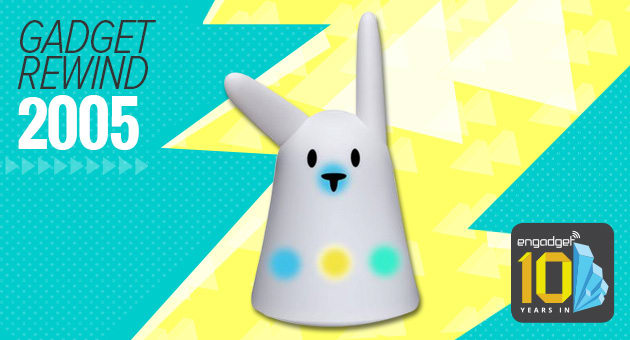 If robotic rabbits could multiply, we'd be overrun by "kawaii" (the Japanese word for "cute") by now. Thankfully, Violet's 2005 Nabaztag robo-bunny has kept its socializing strictly to the digital realm. This adorably designed, WiFi-enabled techno-pet was created as a hub for delivering streams of user data through color, motion and sound. In fact, interaction with this "smart object's" ambient notifications and playful exterior aimed to provide a relaxing and peaceful experience. Did we mention it was also programmed to perform Tai Chi (with its ears)?

Nabaztag could communicate notifications and alerts to users in several ways, but perhaps the most soothing of these options was through color notifications on its face and belly. It could convey changes in the weather, air quality or even express its mood (a random selection) by displaying predefined color codes and moving around its ears.

It was more than just a silent companion for users -- Nabaztag could also be set to read emails, text messages and news headlines from your favorite RSS feeds, and take over alarm clock duties in the morning. It even featured limited voice command abilities. But this robotic rabbit wasn't all business. If you were feeling social, its "find friends" option could surprise you with random messages from other connected Nabaztags around the world.

While Violet would eventually push out an upgraded version of Nabaztag in 2006 that came outfitted with an RFID sensor, the fate of the line as a whole was not secure. It changed hands several times over the years and suffered several server outages that had the connected bunnies go offline -- much to the chagrin of its global user base. Despite all that change and uncertainty, the robo-bunnies did eventually find a home in 2011 with owner Aldebaran, a new name in Karotz and a new stablemate in Pepper the robot.

Did you own a Nabaztag? Add it to your Engadget profile as a device you had (or still have) and join the discussion to reminisce or share photos of your device with other like-minded gadget fans.
In this article: 10yearsin, aldebaran robotics, culture, gadget rewind, gadgetrewind, gadgetry, gadgets, gear, karotz, nabaztag, nabaztagTag, rabbit, robot, robots, smart object, violet
All products recommended by Engadget are selected by our editorial team, independent of our parent company. Some of our stories include affiliate links. If you buy something through one of these links, we may earn an affiliate commission.