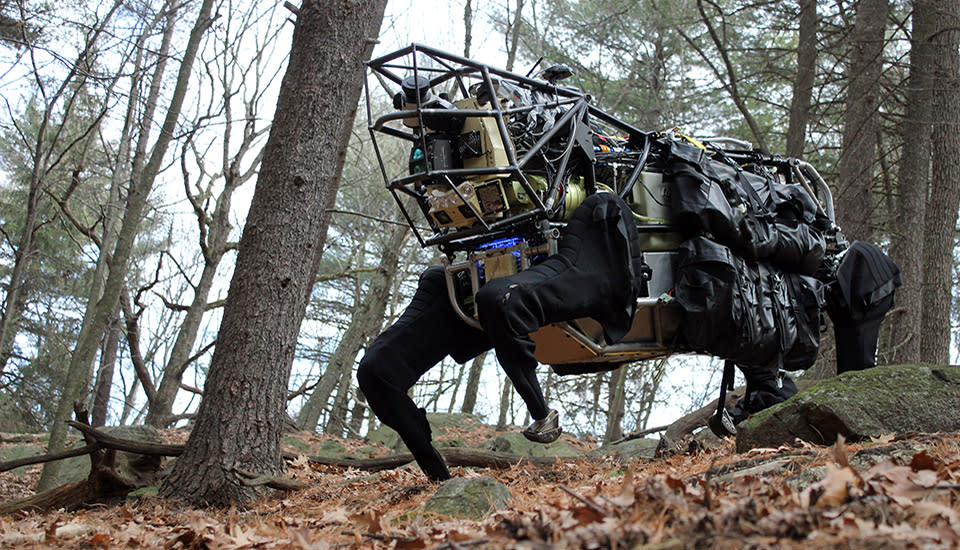 There's a certain entity within the Pentagon that's quite (in)famous for developing terrifying robots, advanced weapons and futuristic tech. It's called the Defense Advanced Research Projects Agency or, as most people know it, DARPA: the Department of Defense's "mad science" division. While all the machines coming out of the agency make it seem like its sole purpose is to build a killer-robot army, DARPA has many, many other projects to speak of. In fact, DARPA's at the heart of some of the most significant technological advances of our time. Hell, there might not be an internet to read this article on if DARPA didn't create it.

HOW DID IT BEGIN?

President Dwight Eisenhower founded DARPA way back in 1958 in order to develop cutting-edge technologies for the United States. Originally known as ARPA (same meaning, but without "Defense"), it was created as a response to the Soviet Union's successful launch of Sputnik, which, according to DARPA itself, signaled that "a fundamental change was needed in America's defense science and technology programs." Since then, it's been involved in several technological milestones; for instance, it developed an early networking system that went live in 1969 called the ARPANET. It's one of the networks that eventually led to creation of the internet, which, suffice it to say, changed the world. Love Siri or Cortana? You can thank DARPA for those virtual assistants, too, as its Speech Understanding Research (SUR) program in the 1970s played a key role in advancing speech recognition technology widely in use today.

HOW DOES IT OPERATE?

Despite being part of the Pentagon, DARPA operates independently from the Defense Department's military research division. Its personnel are divided into groups led by a manager, with each one tackling a particular issue the agency wants to address. These teams are free to look for ideas that would solve the problems they're given both from within and outside the organization. DARPA then provides each group with anywhere from $10 to $40 million in funding. Some projects receive far less funding, but big projects could get up to $100 million. If you're wondering, the agency had a $2.78 billion budget for the 2014 fiscal year and is currently requesting $2.91 billion for fiscal year 2015.

So, what is DARPA doing with the people's money, exactly? Here are some of its most prominent, wackiest and latest projects:

One of the first robotic projects DARPA has ever funded is Shakey the robot, which began development in 1966. Shakey was a multi-purpose machine on wheels that could perform menial tasks like switching lights on or off. These days, the agency's probably most known for its advanced machines, some of which look undeniably unnerving. These include a number of Boston Dynamics creations, such as the four-legged Cheetah, which later became known as WildCat, that can sprint faster than Usain Bolt. BigDog, one of the company's other DARPA-funded projects, is also a four-legged machine designed to traverse tricky terrains while carrying heavy supplies and equipment.

Other than those two quadrupeds, Boston Dynamics continues to refine its disaster-response humanoid machine, called Atlas, for the agency. It's even preparing the biped to walk without a tether before the year ends. When the company was acquired by Google last year, it promised that it would still fulfill its military contracts. But as Mountain View made it clear that it won't be pursuing government funding, it's likely that we won't be seeing a new DARPA-funded Boston Dynamics robot again. Don't worry -- it's not like the agency doesn't have other ways to look for outstanding ideas to add to its roster.

DARPA also hosts an annual Robotics Challenge, with the intention of funding the one that wins top honors. This year's ongoing contest is looking for a humanoid robot to serve as first responder in times of disaster. Sadly, the strongest contender just dropped out, because (surprise, surprise) Google bought SCHAFT, the Japanese company that designed it, last year. SCHAFT is now gearing up to produce the first retail Google robots, so the acquisition sounds like a good thing... unless you're worried that Mountain View's forming a robotic infantry of its own. DARPA's bionic limbs have also been making headlines in recent years -- after all, the division has already sunk $150 million into its prosthetics program. Its earliest mind-controlled bionic arms have been serving their owners for years: The first woman and fourth patient to get one had hers attached back in 2006. Even so, the agency's not resting on its laurels and hasn't stopped trying to come up with better products. In 2013, DARPA took a project that's developing a low-cost, three-fingered artificial arm under its wing and also started working on a brain-controlled arm that can feel. Just this May, the FDA certified the DARPA-funded "Luke" arm, which can understand several commands at once and was developed by the same man who designed the Segway. They're not as widely known as their robotic counterparts, but DARPA's also funding several projects that deal with medical technology. One, for instance, is working on a brain implant to help with psychological issues soldiers usually deal with, such as PTSD and extreme depression. Another one's attempting to conjure up a liquid-to-foam substance to stop bleeding instantly. In other words, the division's heavily investing in medicine for the military, which brings us to the next entry... Hey, DARPA's part of the Pentagon, so it goes without saying that it plays a huge role in developing new military technologies. In 2011, the division tested a hypersonic weapon by flying it across the Pacific Ocean, while it signed a $6 million contract to develop highly accurate laser-equipped sniper scopes last year. More recently, the agency unveiled a head-mounted display that tracks friends and enemies alike and lets soldiers communicate with each other.

Of course, DARPA wouldn't be DARPA if it wasn't brewing something totally out of this world. Some of its crazier-than-usual projects include developing the technology to climb walls like Spider-Man, as well as designing stealthy hybrid bikes for covert operations. "Plan X" sounds like its wildest idea to date, though, as it ultimately aims to turn the real world into 3D that military personnel can access via an Oculus Rift. In this crazy virtual world right out of the movies, soldiers would be able to shoot down hackers like on the battlefield.

Drone initiatives are par for the course, as well. Apparently, DARPA's in the process of turning old surveillance drones into WiFi hotspots, conjuring up a design for drones that can transform into whatever the military needs and developing robotic sea pods that release drones on cue.

You didn't think an agency as forward-thinking as DARPA would limit itself to Earthbound technologies, did you? One of its space programs, called XS-1, is working toward building an unmanned spacecraft that would be a lot cheaper to fly than current models. Then there's the Phoenix program, which aims not only to salvage working parts from dead satellites, but also to send robots to space to assemble satellites on the spot. Also, DARPA's been working on the Space Surveillance Telescope since 2002 in hopes of providing a means to capture images of small objects floating around, including space debris that could collide with and destroy military satellites.

As you'd expect, a military agency that receives billions in funding is bound to have its share of controversies. In 2011, it was discovered that DARPA signed a $1.7 million contract with a bomb-detection firm owned by the family of its then director, Regina Dugan. That even prompted the Pentagon to conduct an ethics probe on the agency, though it was later cleared of any wrongdoing. Still, controversy followed Dugan when she left DARPA for Google, especially since a Washington federal appeals court ruled that any Google-NSA relationship could remain a secret, just as she made the transfer. Needless to say, that development led people to wonder whether DARPA had anything to do with the NSA's efforts to snoop on Gmail accounts.

Think of DARPA as a huge octopus, with too many tentacles to count -- you can't really tell what it's doing unless you focus on it. If you truly want to know the scope of its countless projects, you can follow the agency on Facebook, Twitter, Google+ and YouTube, where it not only reports newly signed contracts, but also posts updates to older ones.

In this article: DARPA, explainer, fullbleed, google, military, robotics, space
All products recommended by Engadget are selected by our editorial team, independent of our parent company. Some of our stories include affiliate links. If you buy something through one of these links, we may earn an affiliate commission.