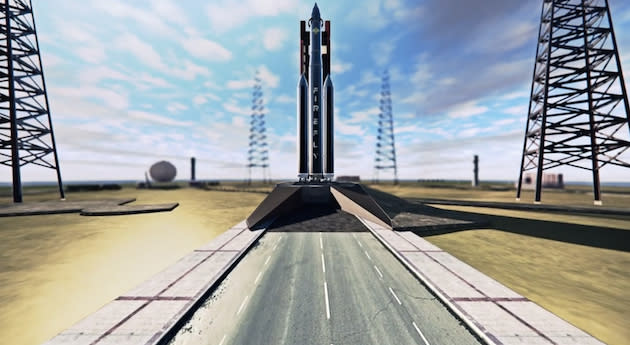 It seems like most things come in threes: celebrity deaths, game console makers and, well, apparently privatized space-faring companies too. On that note, FireFly Space Systems (which includes former SpaceX and Virgin Galactic employees) has recently shown off its first rocket, appropriately dubbed "Alpha," and the outfit claims it's a bit different from the likes of what we've seen before. FireFly says that its vessel uses an engine that's more aerodynamic and thus more efficient than a traditional rocket's bell-shaped blasters. Another differentiator is the type of fuel is uses -- methane. This serves a few purposes. Namely, it reduces weight because the fuel itself is used to pressurize the engine as opposed to the typical helium, and it apparently simplifies design as well. Moreover, methane is relatively inexpensive; it's the same stuff used to heat houses after all. According to NewScientist, the goal is to provide a low-cost platform for launching clusters of small satellites used for, among other things, providing broadband internet.

FireFly says that getting one of its low-Earth-orbit rockets into the atmosphere will cost "around $8 or $9 million." A bit over the SpaceX Falcon 1's $6.7 million to be sure, but hopefully the Alpha won't take four tries to reach orbit its first time.

In this article: alpha, broadband, fireflyspacesystems, space, SpaceTravel, spacex, transportation, video
All products recommended by Engadget are selected by our editorial team, independent of our parent company. Some of our stories include affiliate links. If you buy something through one of these links, we may earn an affiliate commission.