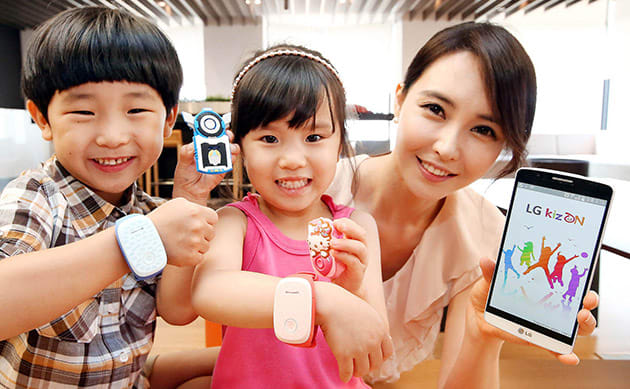 Apparently, LG's been working on a wearable other than the G Watch specifically for helicopter good, protective parents. It's called the KiZON wristband, and it comes in a couple of cute designs aiming to entice kids to keep them on the whole day. After all, if it doesn't stay on, moms and dads won't be able to use the device (with GPS and WiFi) to monitor their locations through a phone or a tablet all the time. KiZON has functions other than serving as a tracker, though -- kids can press its One Step Direct Call button to contact a pre-configured number.

It also works vice versa, but parents get an extra perk: if the kid doesn't pick up within 10 seconds, the device puts the call through and lets them listen to what's going on through the built-in microphone. The device will apparently last for 36 hours on a charge and parents will be notified via phone if the power falls below 25 percent. Its features might sound a bit excessive to some, but easily-concerned parents will be able to get one in the third quarter of 2014 when KiZON lands in North America and Europe.

Update: LG has clarified that at the moment KiZON only works with smartphones, but not tablets.

Source: LG
In this article: kizon, lg, TL16KDWR, wristband
All products recommended by Engadget are selected by our editorial team, independent of our parent company. Some of our stories include affiliate links. If you buy something through one of these links, we may earn an affiliate commission.