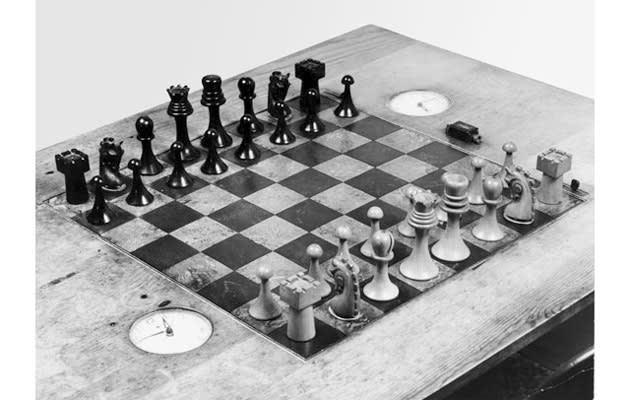 Conceptual artist Marcel Duchamp was known for his "readymades," which declared everyday objects to be works of art -- most notably "Fountain," a public urinal on a pedestal. Duchamp was also something of a chess obsessive and created both an ornate tabletop set and a travel version, the latter of which he wanted to mass-produce. The first of the pair, however, was thought to have been lost to a private collector, so no-one would ever again be able to play with it at least, until now.

Scott Kildall and Bryan Cera teamed up to recreate Duchamp's tabletop chess set from stills the artist took when he sculpted it in 1918. The pair went so far as to use algorithms to extrapolate the necessary geometry from the stills, which helped get an accurate representation of the ornate knight. Even better, is that the pair have now offered up the designs to Thingiverse, enabling anyone with a Makerbot to 3D-print their very own version of the set. It may not have been the set that Duchamp wanted to mass-produce, but 96 years after it was sculpted, now everyone can have a chess set made by one of the 20th century's most prominent artists.

Via: Fast Company
Source: Greg.org, Thingverse
In this article: 3D Printer, Bryan Cera, Chess, Makerbot, Marcel Duchamp, Readymade, Readymake, Scott Kildall, Thingverse
All products recommended by Engadget are selected by our editorial team, independent of our parent company. Some of our stories include affiliate links. If you buy something through one of these links, we may earn an affiliate commission.