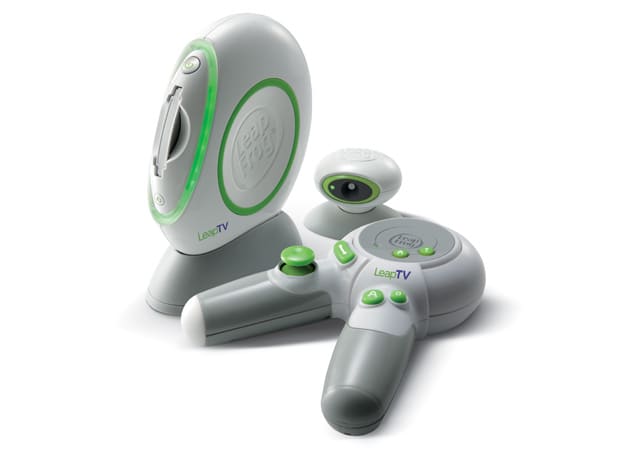 Plopping kids down in front of the boob tube can be a great way for parents to snatch a few seconds of peace, but now kids can be entertained with LeapFrog's LeapTV active video game console. The company's been known for its educational tablets, but now there's a bit more calorie burning involved. The LeapTV uses motion tracking and a unique controller to let kids jump, dance and generally wild out as they work through nearly 100 "educator-approved" games and videos. A TV-mountable camera captures movement for hands-free gameplay. Kids will be able to defend goals, scuba dive, run, hop and karate chop. There's also a Bluetooth controller with a mini joystick and A/B buttons, which can also be transformed into a pointer for Wii-style control. Games come as proprietary cartridges or can be downloaded over WiFi, using the console's 16GB of on-board storage. The system was designed for children ages three to eight and games adapt for each child's level, with reading, math, science and problem solving challenges. The LeapTV will cost $150/£120 and is scheduled to arrive in time for the holiday season, so you still have time to make space in that crowed media center.

Update: The Leap TV is now available. In time for the holiday season as promised.

5
In this article: educational toys, kids games, leap frog, leaptv, motion tracking, video games
All products recommended by Engadget are selected by our editorial team, independent of our parent company. Some of our stories include affiliate links. If you buy something through one of these links, we may earn an affiliate commission.