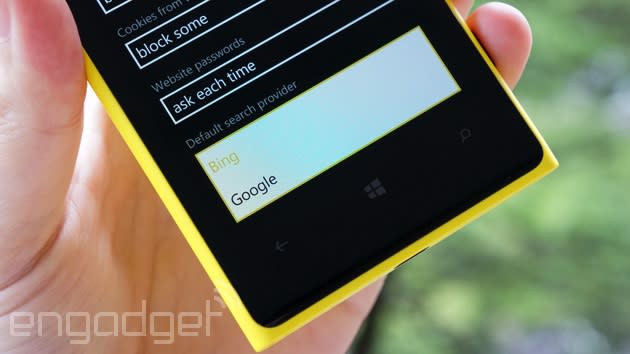 If you're picking up a shiny new Lumia 630 or 930 in the near future, you may be in for an unwelcome surprise. The Verge has discovered that at least some unlocked versions of either Windows Phone won't let you switch Internet Explorer's default search provider to Google; it's either Bing or nothing. Some European models of the same phones do let you change the provider, though, so this clearly isn't a platform-wide policy. We've asked Microsoft if it can share more about what's going on, and we'll let you know if it has more to add. The move likely won't cause that much consternation given that many Windows Phone users are inclined to use Bing, but it's bad news if you like to use Google services on Microsoft platforms.

In this article: bing, browser, google, internetexplorer, lumia630, lumia930, microsoft, mobilepostcross, nokia, search, smartphone, web, windowsphone
All products recommended by Engadget are selected by our editorial team, independent of our parent company. Some of our stories include affiliate links. If you buy something through one of these links, we may earn an affiliate commission.