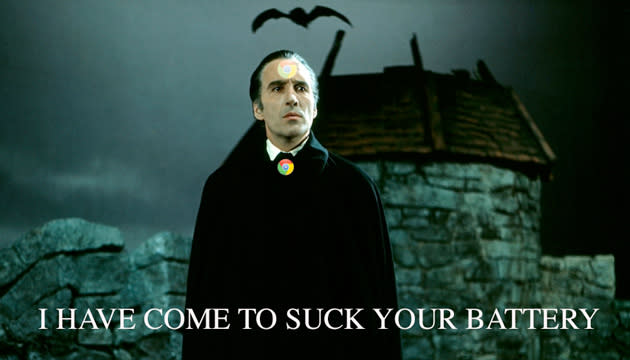 Chrome may be the browser of choice for around 35 percent of the world's internet users, but it's not without its flaws. A report by Forbes has highlighted that the browser won't return to an idle state if it's not being used, demanding significantly more power than rivals like Firefox or Internet Explorer. That's a big problem for laptop users, since their portable Windows machines are losing battery life far faster than they should. It's apparently been a problem since 2010, but it's only now that Google is admitting that something needs to be done about it. In a statement to PC World, the company has pushed the fault to the top of the Chrome team's to-do list, so hopefully it won't be long before you get a lot more browsing before you retreat to a wall socket.

In this article: Chrome, google, Idle, Laptop, Power, Tick Rate, Windows
All products recommended by Engadget are selected by our editorial team, independent of our parent company. Some of our stories include affiliate links. If you buy something through one of these links, we may earn an affiliate commission.