Your smartphone is changing the way your fingers work

MIT's new robot glove can give you extra fingers 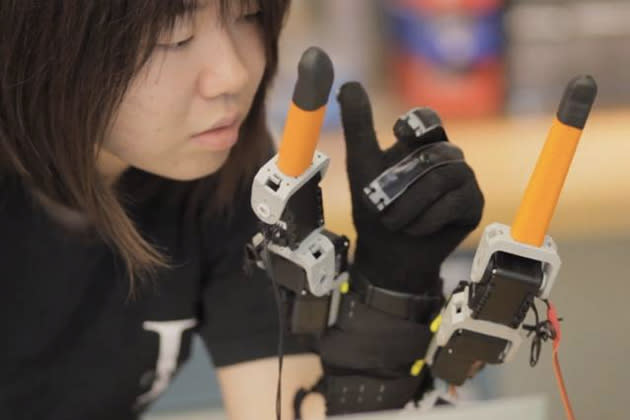 Have you ever wondered if five fingers is really enough? The folks at MIT have. Researchers in the institute's department of mechanical engineering have created a robotic glove that adds two additional digits to the standard human claw, positioning two long fingers on either side of the hand. It's ridiculously easy to use, too. "You do not need to command the robot, but simply move your fingers naturally." Ford Professor of Engineering Harry Asada says. "Then the robotic fingers react and assist your fingers." The glove's movements are based on biomechanical synergy, the idea that each finger reacts to the movements of its peers - if you try to grasp a bottle, the glove's extra fingers will try to help.

The team crafted its synergy algorithm by outfitting a prototype with multiple positioning sensors and grasping assorted objects -- manually moving the glove's two extra "fingers" to help grab or support the object. This data was used to determined a set of specific movement patterns that the final product could use to identify what the user is attempting to do, allowing it to assume a position that naturally augments the wearer's normal hand movements. For now, the glove has to rely on this basic algorithm, but the team hopes to upgrade it to account for the amount of force applied. Future versions of the robotic fingers may also learn actively, adapting to a specific users' gesture style.

The prototype glove is pretty bulky, but MIT researchers are confident that it can be distilled down to a smaller, foldable size. "We could make this into a watch or a bracelet where the fingers pop up, and when he job is done, they come back into the watch," Asada explained. "Wearable robots are a way to bring the robot closer to our daily life."

In this article: fingers, glove, MIT, robot, robotglove, robothand, robotics
All products recommended by Engadget are selected by our editorial team, independent of our parent company. Some of our stories include affiliate links. If you buy something through one of these links, we may earn an affiliate commission.