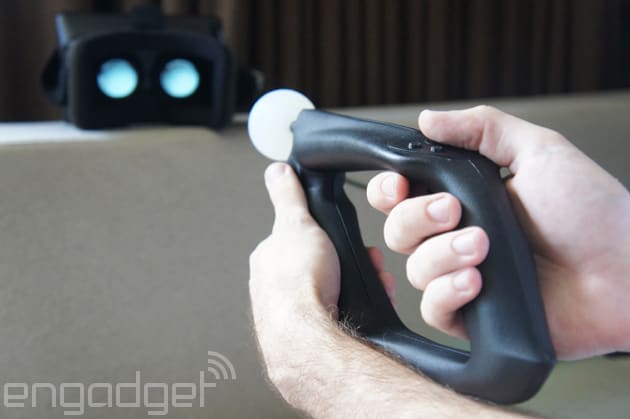 The Oculus Rift isn't even a consumer product yet, but it already has a shadow hanging over its head: how, exactly, are its users going to interact with its intangible, virtual worlds? It's starting to look like the answer will be multifaceted, requiring users to own different devices for different gameplay scenarios. Trinity VR wants to be gamer's go-to product for the FPS genre, and have just launched a Kickstarter campaign to fund its Magnum VR controller. We caught up with the company in San Francisco to give its prototype controller a quick look; here's what we found out.

It's hard to look at the Trinity Magnum without thinking about the PlayStation Move. It's not an intentional likeness, but rather a necessity of the technology it uses: optical light tracking. Just like Sony's kit, the Magnum uses a webcam and a bright glowing ball on its front end to facilitate 1:1 positional and orientation tracking. Unlike the Move, however, Trinity's motion controller is specifically designed to be a firearm analog -- peppering a two-handed rifle grip with four buttons, two analog nubs and, of course, a trigger. The 3D printed prototype we saw seemed well designed, placing a horizontal analog nub directly under the thumb's natural position on the forward grip, but the model was sadly non-functional: we never found out how the sideways inputs felt during practical use. 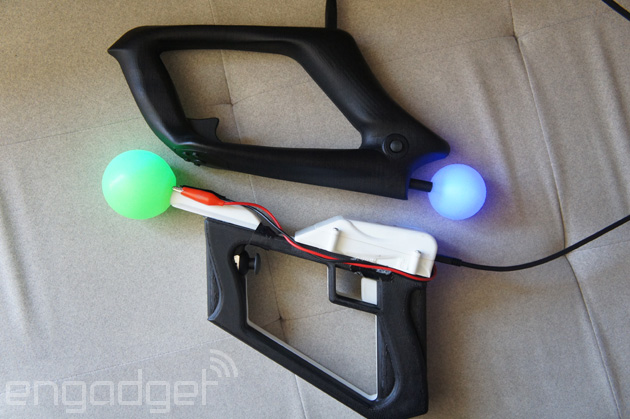 Trinity did have a functional unit on hand, but it didn't quite have all the features of the aforementioned prototype. A single analog stick and a trigger were all the hand-built device had to offer (aside from some charming exposed wires and, of course, a glowing green ball), but it performed well in it virtual space: handily tracking movements with little to no visible latency. It certainly performed well with the limited FPS demos we were shown, but we couldn't help but wonder what set the Trinity Magnum apart from its competitors. The answer surprised us: price. While there are plenty of complicated, versatile and amazing VR control setups on the way, they all ring well into the triple digits. Trinity told us that its developer kits will be closer to a $100 price tag, and it hopes the eventual consumer controller will be priced competitively with standard console gamepads.

Trinity VR's Magnum isn't going to become the de facto control standard for all virtual reality experiences, but it certainly shows promise as a motion tracking FPS controller - and if it can be had at a competitive price, it could do well as a go-to niche controller for the genre. Still, there's a long way to go before the product becomes a reality -- the firm needs to finalize its ergonomic design and button layout, improve its positional tracking and catch the eye of budding VR developers. Want to help? Well, there's a Kickstarter page for that: early backers can nab a developer kit for $75 a pop, while regular backers will have to cough up a full $99. Check out the source link below for full details.

Source: Kickstarter
In this article: controllers, crowdfunding, kickstarter, motioncontrol, Oculus Rift, Trinity, Trinity VR, virtualreality, vr
All products recommended by Engadget are selected by our editorial team, independent of our parent company. Some of our stories include affiliate links. If you buy something through one of these links, we may earn an affiliate commission.