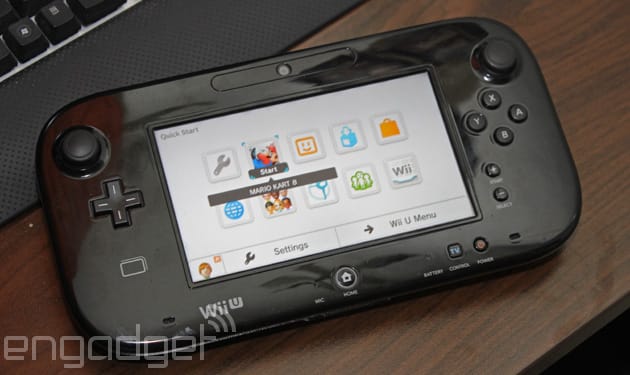 Thinking of upgrading from that basic Wii U system to the deluxe 32GB package? Now you can -- the latest system update for Nintendo's tablet-toting console allows users to transfer data between systems... but it does so in a rather odd way. Rather than allowing users to sign out of their Nintendo Network ID account on their old console and simply log on to a new one, Nintendo's system transfer process requires both Wii U systems to be simultaneously running in the same place at the same time. On the 3DS, this was an easy proposition, but for a home console like the Wii U, well, the solution seems a bit inelegant.

The update also updates the Nintendo eShop to allow navigation with the Wii Remote, Wii U Pro Controller or Classic Controller. This seems minor, but it's actually a very convenient fix: until now, the Wii U digital store could only be navigated using the Wii U GamePad controller, despite having full button controls that would have translated well to the optional Wii U Pro Controller. It's a good change -- now if only Nintendo could bring the same controller compatibly to the console's virtual Wii menu. In Japan, the update also adds support for NFC payments via Suica card, which is commonly used in convenience stores and train stations.

Source: Nintendo
In this article: nintendo, systemtransfer, update, WiiU, WiiUGamepad
All products recommended by Engadget are selected by our editorial team, independent of our parent company. Some of our stories include affiliate links. If you buy something through one of these links, we may earn an affiliate commission.