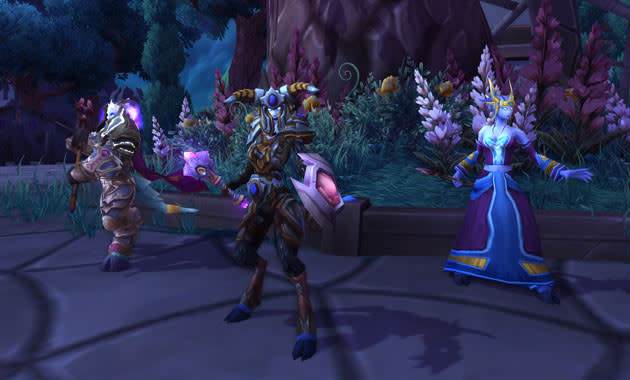 In some of the most popular multiplayer role-playing games, like World of Warcraft (the NSA's favorite), in-game characters and items can change hands for substantial amounts of real money. So when a gamer is relieved of valuable loot or accounts by scammers or thieves, should these online opportunists be considered criminals? It's a question one UK politician wanted to address in Parliament yesterday, as he called for real-world sentences to be handed out for these virtual crimes. The politician, a WoW player himself, requested the UK Justice Minister accelerate legislation to that effect, arguing that gamers are entitled to the same amount of legal protection. He added that only serious and/or serial offenders be targeted, though, rather than throwing the book at anyone who's committed a minor indiscretion. The Justice Minister did say online fraud or theft can carry severe sentences, but that it's ultimately up to courts to decide on the punishment.

While it might sound daft, prosecuting someone for pinching a magical sword inside a computer game, we doubt the person who's just seen $1000 disappear from their inventory shrugs it off so lightly. It's a legal grey area, as courts have to decide whether items that are purely digital, and the time spent questing for such epic loot, have any real value. Last year in China, the ringleader of a group that bought stolen WoW accounts and stripped them of items for profit received a two-year jail sentence. Also, prior to that, one kid in the Netherlands was beaten and threatened with a knife IRL until he gave another RuneScape player valuable items, with the offender given a community service order as punishment. As that particular incident shows, sometimes it's not "just a game."

In this article: game, games, legal, mmorpg, worldofwarcaft
All products recommended by Engadget are selected by our editorial team, independent of our parent company. Some of our stories include affiliate links. If you buy something through one of these links, we may earn an affiliate commission.