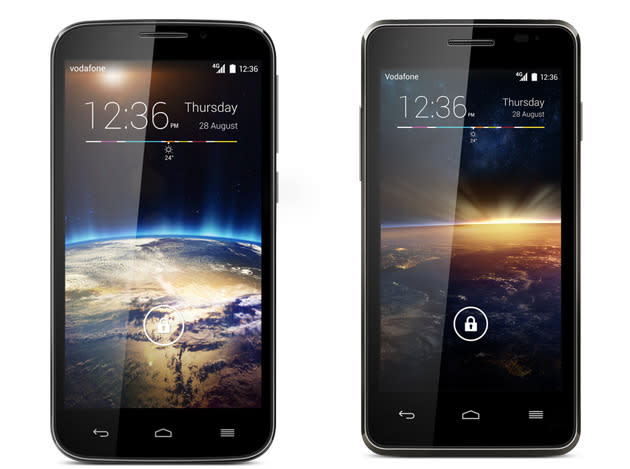 Last year we would've bet our lunch money on Vodafone being the first UK carrier to release an own-brand LTE smartphone. After all, we spotted a "Vodafone Smart 4G" picking up its roaming permit from the US communications regulator, and only a few weeks after the carrier switched on its UK LTE network. Alas, the phone was destined for other European countries and EE pipped Vodafone to the post with the launch of the 4G-friendly Kestrel. Vodafone's finally caught up, however, releasing a pair of LTE handsets under its own name: the Smart 4 power and Smart 4 turbo (left and right in the image above, respectively). The turbo is the inferior of the two, with a 1.2GHz quad-core processor and 4.5-inch 854 x 480 display, while the power is outfitted with a 1.3GHz quad-core Mediatek processor and 5-inch 960 x 540 screen. Otherwise, both have 1GB of RAM, unspecified amounts of on-board storage (with microSD support), 5-megapixel main shooters, front-facing cameras, and run Android 4.4 KitKat.

If you want either free on a 4G contract plan, prices start at £26.50 per month. Alternatively, the turbo is £135 on pay-as-you-go, while the power is £175 (note that you can only purchase them in-store currently). By no means extortionate, but we would've liked to see more competitive price points for these entry-level 4G handsets. The Sony Xperia SP, also on Vodafone's roster, is only £150 on pay-as-you-go, and you can buy a fully unlocked 4G Moto G for £140 on Amazon right now. EE's Kestrel and its capable quad-core Snapdragon 400 processor is only £99, too, making Vodafone's first crack at own-brand LTE smartphones less high-impact, more dull thud.