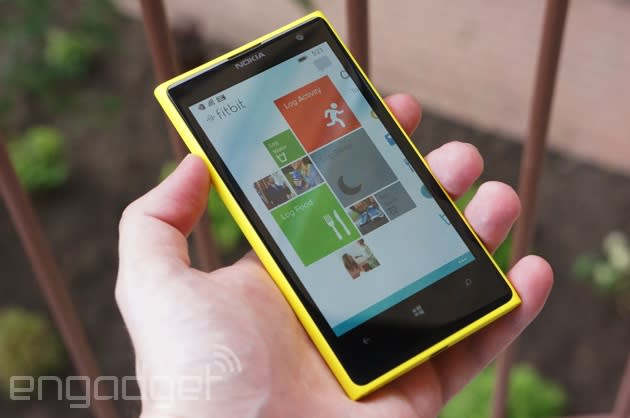 If you've wanted to use activity-tracking wearables that pair with your phone, you've typically had to use Android or iOS. Windows Phone has some third-party apps that can fill in, but they're imperfect at best. As of today, though, an official solution is at hand -- Fitbit has released its own Windows Phone 8.1 app. You can now sync trackers like the Flex, One and Zip to your Microsoft-powered device to get real-time step and sleep monitoring, complete with a step counter on your home screen if you set up the Live Tile. Other Fitbit fundamentals are also here, including food logging, leaderboards and messaging.

The app is free, and it doesn't require a peripheral if you just want some basic tracking; getting Windows Phone 8.1 is the biggest hurdle. You'll need Bluetooth 4.0 support to make use of any Fitbit gear, however, so double-check that your particular Windows Phone is good to go (many of them are) before you start planning your fitness regimen.

In this article: activity, activitytracker, exercise, fitbit, fitbitflex, fitbitone, fitbitzip, fitness, flex, mobilepostcross, one, smartphone, wearable, windowsphone, windowsphone8.1, zip
All products recommended by Engadget are selected by our editorial team, independent of our parent company. Some of our stories include affiliate links. If you buy something through one of these links, we may earn an affiliate commission.