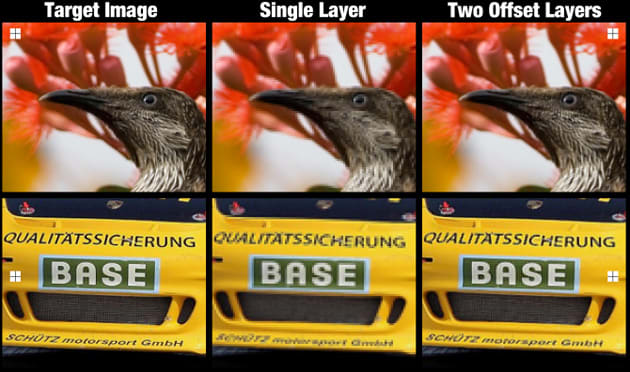 Face it, the tech industry is obsessed with resolution; we want every display to be high definition, regardless of size. We also want our devices to be affordable, leaving device manufactures with an interesting problem: how do they manufacture low-cost products with high-resolution screens? NVIDIA researchers have one solution -- stack two low-resolution panels on top of each other to increase pixel density on the cheap. The solution is so simple it sounds ridiculous, but apparently, it works.

Researchers disassembled two 1,280 x 800 LCD panels and rebuilt them into a single display with slightly offset pixels, a filter to weed out polarization conflicts and a bit of customized software to force the display components to work in tandem. NVIDIA calls the resulting prototype a "cascaded display," and in tests it has quadrupled the spatial resolution of the original panels (thanks, in part, to how the pixel offset crams an additional four pixels behind every one of the first panel's visible pixel).

The images produced by the cascaded display aren't quite as good as the full resolution target image, but it's leaps and bounds ahead of the capabilities of the original 1,280 x 800 panels. It's also a comparatively inexpensive way to build higher resolutions screens for head mounted displays like the Oculus Rift. These hobbled together panels aren't perfect, of course -- the cascaded display is less bright than a typical screen and apparently has poor viewing angles -- but the research could lead to a better way to build affordable, high definition electronics. Check out the video below to see the technology in action.

Via: ExtremeTech
Source: NVIDIA
In this article: displays, HMD, NVIDIA, research, technology
All products recommended by Engadget are selected by our editorial team, independent of our parent company. Some of our stories include affiliate links. If you buy something through one of these links, we may earn an affiliate commission.