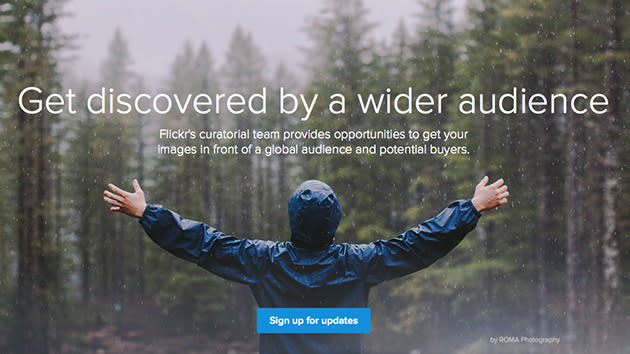 It looks like Flickr's trying to keep pace not only with Instagram, but also with photography community 500px. The Yahoo-owned image hosting site has just launched a new program, which gives some users the opportunity to earn money from their snapshots through commercial licensing with publications and photo agencies. In addition, Flickr promises to give the the program's members ample exposure by featuring their work prominently on Yahoo's portals and other properties like Tumblr. The service's new marketplace page also names The New York Times, Reuters, Gizmodo, Monocle, BBC and Getty Images as its program partners.

According to TechCrunch, though, this has caused friction between Flickr and Getty, as the latter used to curate Flickr content itself, and this program turns curation into an in-house task. Flickr didn't say how much the licensing fees are and what percentage users will end up taking home on its blog post, but it did mention that the company will invite select users through Flickr Mail. If you don't get an invite but would still like to give it a spin, you can submit your profile for consideration by signing up for updates on the marketplace. When that's done, you can carry on crossing those fingers in hopes that Flickr finds you worthy.

In this article: 500px, flickr, licensingprogram, Yahoo
All products recommended by Engadget are selected by our editorial team, independent of our parent company. Some of our stories include affiliate links. If you buy something through one of these links, we may earn an affiliate commission.