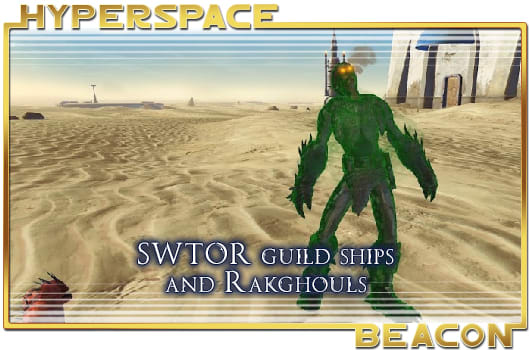 This weekend was full of space zombies and capital ships in Star Wars: The Old Republic. I ended up dividing my time between the live servers hosting the Rakghoul event on Tatooine and attempting to make the most out of having a guild ship on the public test server.

Unfortunately, my guild's capital ship fell victim to the Bermuda Triangle bug that makes ships completely disappear, and I wasn't even able to buy a new one. I chalk that up to testing. And I certainly will not cry foul because of it. Besides, the ship was eventually restored, just not in time for my guild to really make any headway in the conquests for this week.

However, I did get to experience the ship some because I was on the SWTOR official livestream last week, and I also created my own guild on PTS to test out the capital ship features.

But first, let's talk about Rakghouls.

Today, the latest Rakghoul event ends for Star Wars: The Old Republic, and although I'm sad to see it go, there were a few things that confused me about the whole thing. I commend the event as a whole. There were plenty of things to do, but I didn't feel as immersed in the experience as I did the first couple of times BioWare hosted this event.

You might remember the first event with its sudden announcements on the fleet about a crashed ship on Tatooine. Personally, I noticed that there was no server shutdown nor any real indication that anything had changed. Of course, that was refreshing, but the event thrived without that bit. And the second Rakghoul event showed that the SWTOR development team could do events right, even with a smaller team.

In the second Rakghoul event, players found a world boss on the planet surface and a minor quest in the main faction cities of Alderaan. Then when players made it to the underground tunnels, it was easy to associate the tunnels with the Alderaanian Killiks. However, when the BioWare team moved the event to Tatooine, it changed nothing about the tunnels. The tunnels were wet -- standing water even -- and full of moss.

I appreciate BioWare's desire to reuse the same tunnel layout to save development time, but my immersion was complete lost when the tunnels didn't resemble anything that we'd associate with the desert world of Tatooine. And no, the odd Tusken Raider doesn't count.

That said, I say the event as a series is wonderful, and it's good to have an event like this: unannounced, drawing us back to other planets, and meant for nearly all levels.

My first surprise when seeing the guild capital ship was its size, or rather its model. I was honestly thinking that it would be a Gage-class cruiser like the Black Talon, but no. BioWare gave us the biggest ship in the game: a Harrow-class Dreadnought. Raiders and players running flashpoints are familiar with the Ziost Shadow. The ship is that size; in fact, the bridge is exactly the same and equally impressive.

The guild capital ship is truly amazing and exactly what I would want in a command center for a guild. The decorating hooks are huge and plentiful. To top it off, you can travel from planet to planet, giving your guild buffs for its adventures.

My biggest concern about the guild capital ship is the barrier of entry. The initial 50 million credits for the ship will be more than difficult for some guilds. I have heard the arguments for the other side, and I've also weighed it against what my own guild can do, and I believe that despite it all, 50 million credits is too high a hurdle.

Now, I can possibly make 10 million credits in a month. I'm not the best at playing the GTN, but I'm not bad. But I do play the market some. Many players don't do that at all; even some in my guild have no clue how to really sell things on the GTN. I also believe that my guild has an unusually high number of people who are Cartel Market whales or market specialists or both. Although our guild sits at about 20 SWTOR players, a couple of them could buy their own capital ship. However, if we were to remove those couple of players, the other players combined would be hard-pressed to make that kind of money. In fact, the majority of those players in my guild who aren't in the 1% have maybe just over a million credits and have been playing the game for years.

There are two arguments made by those people who believe that 50 million credits is just right. And although I will not defer to their point of view, I don't want to completely discount it either.

First, they believe that 50 million is not as hard to come by as players are making it out to be. The argument states players can make about a million a week doing dailies if they did so nearly every day. A guild of 10 could have 50 million in five weeks. In the grand scheme of things, that isn't a long time. I see the point, and I agree that it works on paper. But in reality, players will not stick to something that is unfun everyday for five weeks, no matter the drive. Most will give up completely, if they even have time in the first place.

The second, albeit weaker, argument is that players want things handed to them. While this argument is partially true -- I'm sure there are some players who want everything to be easy -- the majority of players that I know who say that the 50 million bar is set far too high argue that it shouldn't be that much of a struggle to get the ship; instead, it should be more of a struggle to grow the ship.

There are five levels on the capital ship, six if you count the officers' quarters, which are automatically unlocked. Each of these floors has multiple rooms that require 5 million credits and at least 2 frameworks (a conquest item) to unlock. All told, it will cost 75 million credits and 54 frameworks to unlock all the additional rooms for the guild capital ship on top of the 50 million to start.

Most who argue that 50 million is too high a barrier would say that 75 million for the additional rooms would be too low for the other 15 rooms. I agree. If BioWare wants it to cost 125 million total to unlock the whole ship, it should lower the initial cost to 25 million and the other rooms to about 7 million each. Problem solved, and in the end, the much-needed credit sink would be even more effective.

As always, let me know what you think in the comments and on the Hyperspace Beacon, and may the Force be with you.

In this article: bioware, ea, electronic-arts, expansion, featured, guild-captial-ships, hyperspace-beacon, in-game-event, lucasarts, opinion, rakghoul, rakghoul-plague, sci-fi, star-wars, star-wars-the-old-republic, swtor, the-old-republic, tor
All products recommended by Engadget are selected by our editorial team, independent of our parent company. Some of our stories include affiliate links. If you buy something through one of these links, we may earn an affiliate commission.