EyeForcer wants to force your kids to sit up straight

Adventures with a homemade standing desk

Next gen PSP to have touch controls -- on the wrong side?

The Daily Grind: What would bring you back? 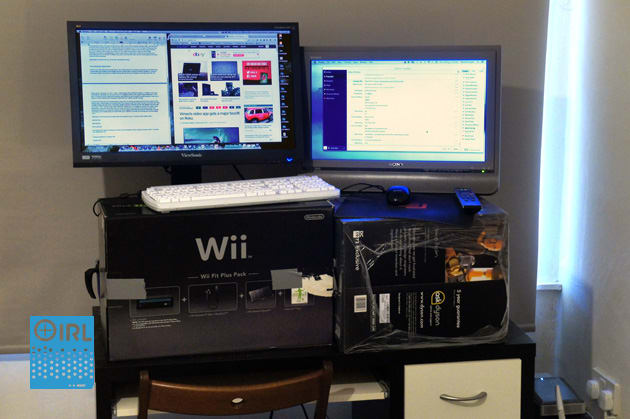 I, Dan Cooper, am today going to review some cardboard boxes. Not Google Cardboard, nor Luckies' Cardboard Smartphone Projector (which is coming in a few weeks), but some honest-to-goodness cardboard. More precisely, the box for my Nintendo Wii + Wii Fit starter pack, the packaging for a Dyson DC19 T2 Exclusive and an Image Business five-ream printer-paper box. I should add that I haven't been paid by any of the above companies, and each one came with the implement it was purchased with -- oh, except for the paper box, which my wife brought home from her office one day.

As I've grown fitter (and happier), I've also learned that the biggest drawback to my continued weight loss is that I sit for around 12 hours each day. That's not a particularly healthy approach, and I've started to develop some serious lower-back issues -- not an uncommon complaint among Engadget editors. One of my colleagues suggested that I take up Yoga, but I lacked the patience or acrobatic ability to sit with my legs up a wall for 30 minutes at a time. Then I read Brett Terpstra's account of how his standing treadmill desk had changed his life, and after reading up on the benefits of them, decided to conduct a little experiment.

After sourcing the boxes from the attic, I propped up my monitors, keyboard and mouse onto the boxes, adding some books for extra height where necessary. It was my way of working out if an adjustable-height desk would work for me, and if it's something that I'd consider investing in at some point down the road. After all, standing adjustable-height desks either require a great knowledge of DIY (there are thousands on IkeaHackers) or a decent chunk of money (especially in the UK, where some will set you back £1,000), and I didn't want to splash out without knowing if it was for me.

The first week had the benefit of being one of the most painful in recent memory, and every night I retired to bed exhausted and with legs that ached as if I'd run a marathon. Despite the numerous promises of "vastly increased productivity," those initial weeks saw my output collapse. I was testy, pained and constantly distracted. The second week, however, things started to pick up, but my willpower was close to breaking at several points. By week three and beyond, the pain had gone, and I'm sure there's a new indentation on both calf muscles, which I'm hoping is a sign of progress. Six weeks later and my monthlong experiment shows no signs of ending. In fact, the only thing that I'm worried about is the durability of the cardboard, which I hope will last as long as I need it to.

Part of the process has been learning how to manage yourself while at a standing desk, which has changed over time. For instance, I'd originally stand through from 8AM until 6PM, but now I try and take a 30-minute break to sit and eat lunch, which gives me the stamina to power through. I've also taken to shifting from one foot to the other almost constantly, and if one leg begins to hurt a bit too much, I give it a 10-minute rest by tucking it up under me and standing on one leg. Like a flamingo. Yes, I'm also glad I work from home.

I'm aware that the next thing that I need to invest in is a soft rubber mat, which is designed to reduce leg fatigue that's somehow generated when standing on a hard surface. I'm dubious as to how specifically this issue occurs and why it requires an expensive accessory imported from the US, but it's something I'll keep researching. One thing a lot of the internet told me was that a standing desk went hand-in-hand with weight loss. I don't think I've seen any notable difference in my weight, but maybe that'll take a little longer to achieve. I'm not sure if there's been any tangible health benefit overall, but since it's almost completely resolved the issues with my back, I'll keep going.

In fact, at this point, it's a nailed-on certainty that I'm going to invest in an adjustable-height desk when the cardboard here begins to wither and bend. I doubt I'll have the cash to try a treadmill desk, but never say never. What I will ask is that if any of you in the UK have any experience with a standing desk that'll take a desktop dual-monitor setup and the heavy-handed typing of this 90kg lump, I'd be happy to hear your recommendations.

In this article: Back, Cardboard Box, desk, engadgetirl, fitness, Health, Image Business, IRL, Standing Desk, StandingDesk, weight loss
All products recommended by Engadget are selected by our editorial team, independent of our parent company. Some of our stories include affiliate links. If you buy something through one of these links, we may earn an affiliate commission.