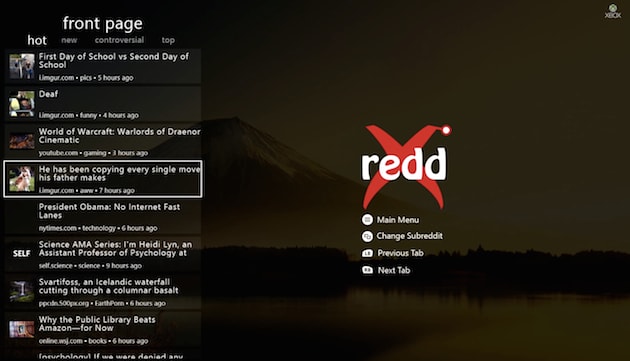 The internet's front page is coming to an Xbox One near you. ReddX is what Microsoft is calling the first ever Reddit app for TVs and it'll allow you to browse through r/gaming or the rest of the site while you're, you know, playing games, and it's rolling out today. A post on Xbox Wire notes that there are media-specific achievements to unlock that are named after gaming memes (Scumbag EA, perhaps?) and there's even a customized main page. More than that, you'll be able to upvote, comment and perform any of the site's functions while holding an Xbox One controller or SmartGlass device. You can also control GIFs, view image galleries and even watch embedded YouTube videos without leaving the app, and, because it's on the Xbox One it can of course be snapped in alongside something else and is controllable with voice. To show off just how it all works, Larry "Major Nelson" Hyrb wrote a post to Reddit directly from the application.

Posting to @reddit using the new ReddX app for Xbox One pic.twitter.com/tMXnqIMr1H

A few new features are coming to the Twitch app, too. You'll now be ale to capture audio from a chat headset and watch broadcasts with pals. Perhaps most notably, though, is that the Kinect can now follow and zoom in on your face (like it does for Skype) so you don't have to sit two feet from the sensor anymore, making it easy for fans to gaze upon your mug.

For a moment, let's say the internet's largest message board and live-streaming service aren't your bag, though. That's totally fine! MTV is coming to the Xbox One as well and it's bringing full episodes of certain TV shows in addition to bonus clips and behind-the-scenes access for US cable subscribers. Will there be music videos? We doubt it, but you never know.

There's a new workout available in Xbox Fitness that fans of the Seattle Seahawks might be excited about, as well. Quarterback Russell Wilson's workout apparently is a high-intensity affair that focuses on power and agility, among other aspects, in 40 and 20 second intervals. After a 3D Blu-ray marathon, a little exercise might be in order. Or not.

Via: Twitter
Source: Xbox Wire (1), (2), Major Nelson
In this article: gaming, hd, hdpostcross, microsoft, mtv, reddit, reddx, twtich, xbox, xboxfitness, xboxone
All products recommended by Engadget are selected by our editorial team, independent of our parent company. Some of our stories include affiliate links. If you buy something through one of these links, we may earn an affiliate commission.