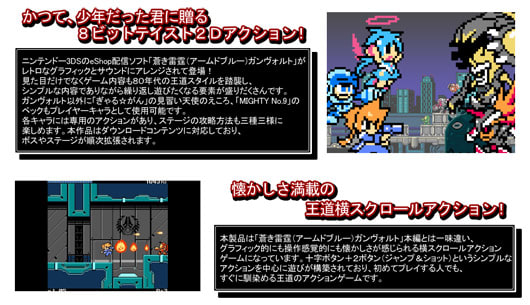 Players who hop on the Azure Striker Gunvolt bandwagon when it launches in the 3DS eShop next week will receive a free bonus minigame that features a playable character from fellow Keiji Inafune project Mighty No. 9.

[Video: Inti Creates]
Via: Destructoid
Source: Mighty Gunvolt, @GunvoltGame
In this article: 3ds, azure-striker-gunvolt, eshop, gal-gun, inti-creates, keiji-inafune, mighty-no-9, nintendo
All products recommended by Engadget are selected by our editorial team, independent of our parent company. Some of our stories include affiliate links. If you buy something through one of these links, we may earn an affiliate commission.