'Sea of Solitude' looks like a brilliant, emotional horror show

'Selfie harm' and the damage done by social media

MIT built a health-tracking sensor that can ‘see’ through walls 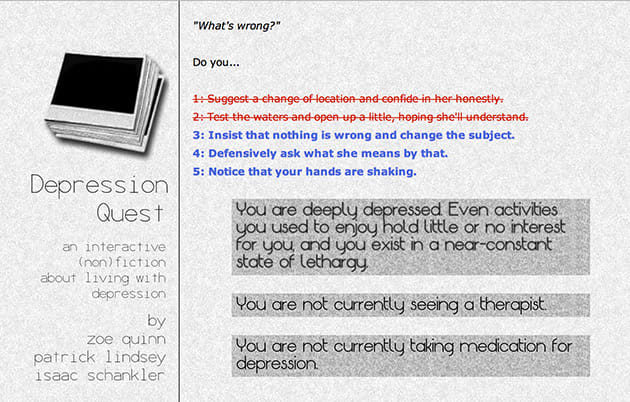 Unless you're deep in the throes of it yourself, actual, clinical depression can be incredibly hard to wrap your head around. Sure, you can scroll through the Wikipedia article all you like, but intellectually knowing about and feeling depression are two completely different beasts. Zoe Quinn's Depression Quest (which recently hit Steam after a year floating around on the web) is an experience that sort of straddles the line between the two, and -- in spite of a related mess that's still unfolding -- is still worth checking out.

The thing to bear in mind is that Depression Quest isn't a really a game. On a purely mechanical level, it has more in common with visual novels (though DQ doesn't really have any visuals to speak of) and the choose-your-own-adventure books of yore. The choices available to you fluctuate depending on the ones you've already made, and while it's not hard to figure out how to reach the "best" ending, it's still frustrating to see what options get shut out as you embark down branching mental paths.

What it is -- at least to me -- is evocative. As you guide your nameless protagonist through pained days and seasons (don't worry, the whole experience is pretty short), you might feel the occasional twang of empathy as you blow off a fictional coworker's invitation to hang out or struggle with the prospect of adopting a kitten. At times that twang might grow into a dull throb when some of these situations strike a little too close to home. They certainly did for me; I'd occasionally read through a paragraph or two of exposition only find to myself asking some weighty questions when I finished. Am I weird for feeling the same way? Should I choose the "right" option, or what I know I'd do in that situation? Do I need to explore some of the options available to my protagonist? It's that weird sort of cognitive dissonance that can make Depression Quest such an experience.

That's not to say the experience is a flawless one. Quinn admits in a prologue that the story doesn't strive for medical accuracy, and you'll occasionally be struck by how clichéd and hamfisted things can get. If you frequent Tumblr or spend your time in the geekier corners of the web, you'll probably also know that Quinn has recently been caught up in a personal and ethical firestorm or two (which has been dissected endlessly elsewhere, and that I offer no judgment on) that might color your perception of her work. Try to resist that urge. At worst, you'll get sick of Depression Quest, quit Steam after 10 minutes and move on with your day. At best, though, you just might get a taste of the sort of self-loathing and smothering ennui that so many people with depression experience to varying degrees everyday.

Source: Depression Quest
In this article: depression, depressionquest, games, gaming, interactive, story, visualnovel
All products recommended by Engadget are selected by our editorial team, independent of our parent company. Some of our stories include affiliate links. If you buy something through one of these links, we may earn an affiliate commission.