Lyft expands free voter rides to all US primaries 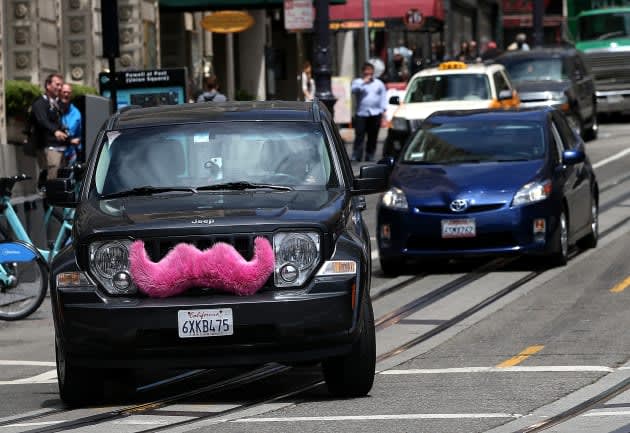 We've already heard reports that Uber was allegedly ordering and canceling Lyft rides in an attempt to sabotage the competition. Well, it turns out that was just the tip of the iceberg -- Uber apparently has a whole secret plan in place to take down its pink mustachioed rival. The Verge has uncovered evidence that Uber has hired a full-on team of independent contractors and provided them with burner phones and credit cards to recruit existing Lyft drivers away and join the Uber clan. Known as "Operation SLOG," these so-called brand ambassadors would call up a Lyft ride, get in the car and then go into their recruiting spiel -- they even have driver kits so they'd be able to sign up the Lyft driver there and then. The SLOG team also took care to not get caught -- The Verge found emails that warned the ambassadors to not request calls from the same place, and there's even a GroupMe account where they can compare Lyft driver profiles so they don't accidentally recruit the same person.

In response, Uber published a blog post saying that Operation SLOG, which it says stands for "Supplying Long-term Operations Growth," is a legitimate recruiting drive and denies that anything they've done is underhanded. Instead, Uber states that the SLOG recruitment efforts involve driver incentive programs, brand ambassadors, rider/driver recruitment campaigns and vehicle financing. Notably, Uber states as a "Marketing 101" point that it doesn't deny taking rides in order to recruit new drivers. They also reiterated that they would never intentionally cancel rides. However, The Verge says that these recruiters sometimes do cancel Lyft rides, perhaps not just to keep them off the market, but also to avoid detection by Lyft. So far, Lyft has not responded to the story, and apparently the recruiters have been warned not to speak to the press. It all sounds a bit like a chapter out of a spy novel -- it seems the ridesharing turf wars have become a lot more intense than we realized.

Source: The Verge, Uber
In this article: lyft, ridesharing, uber
All products recommended by Engadget are selected by our editorial team, independent of our parent company. Some of our stories include affiliate links. If you buy something through one of these links, we may earn an affiliate commission.