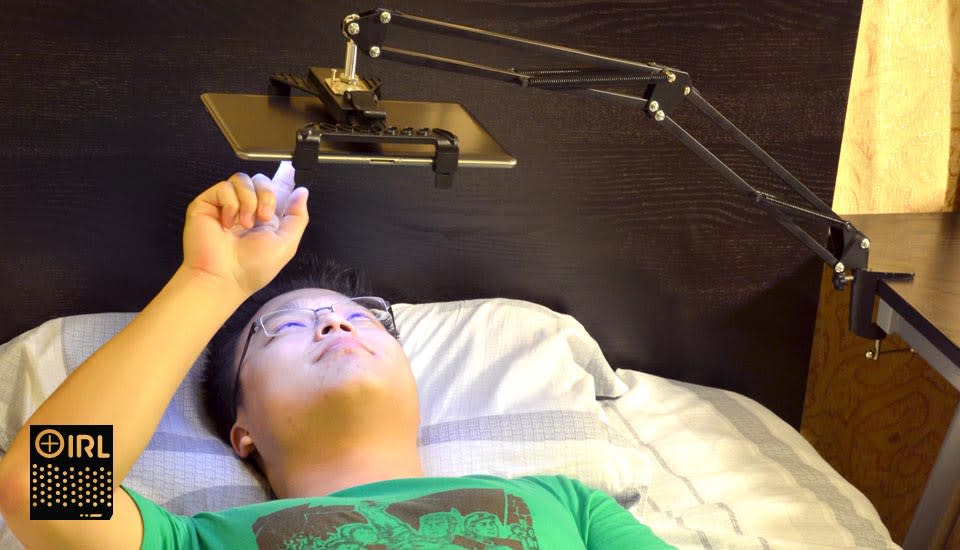 There are times when I just want to lie in bed and surf random YouTube channels on my phone or tablet, but it's impossible to hold the device above my head for a prolonged period (we've all been there, right?).

Luckily, I stumbled upon this neat kit in Shenzhen one day: a swing-arm tablet holder by some random brand called Usiabu, and it only cost me CN¥80 or $13, as it was from a wholesale dealer (retail price is around $25 in Hong Kong, and Amazon's start from around $30). As you can tell from the price, this product doesn't involve any groundbreaking technology: you've probably already come across desk lamps that use this type of spring-loaded mechanism.

Installation is simple: secure the c-clamp mounting base onto the edge of a desk, insert the steel arm via its rotation pin and mount the plastic tablet bracket onto the dual-axis pivot for 180-degree vertical and 360-degree rotation. The arm stretches to about 90cm -- which is sufficient -- and the tablet bracket can handle screen sizes from 7 inches up to 12 inches; you adjust it by sliding one half of the bracket, and lock its position with a latch on the back. The tablet can also be lightly tilted within its bracket courtesy of sliding padded feet.

I've been using this tablet holder for over a year now (though not every single night, of course) and find it to be very handy, more so than the bendy versions that require more effort to position one's tablet or phone. The hinges are still surprisingly tight, so thankfully, my tablet hasn't yet dropped onto my face. If anything, I'm just disappointed by how some of the metallic fixtures have gone slightly rusty. The tablet bracket's release mechanism can be a bit fiddly when I'm lying on my bed, as the loosened latch drops down due to gravity, which then still locks the bracket's sliding part. Still, given how little I paid for it, these issues are relatively minor.

In this article: engadgetirl, irl, mobilepostcross, tablet holder, usiabu
All products recommended by Engadget are selected by our editorial team, independent of our parent company. Some of our stories include affiliate links. If you buy something through one of these links, we may earn an affiliate commission.