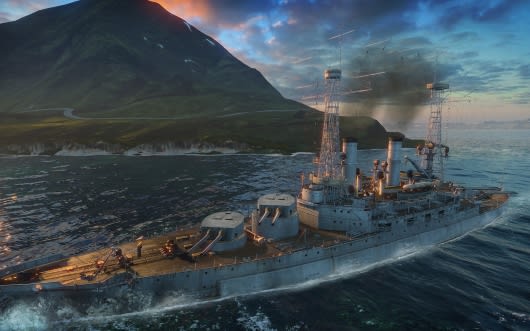 A warship is understandably larger and more complicated than a tank or plane, which is why Wargaming is diverging slightly with its third online title. At PAX Prime, I sat down with the dev team for World of Warships to see how the alpha is progressing and what a fleet of ships looks like with all guns blazing.

There are four types of ships from which players can choose when they step into a match. Destroyers are smaller and faster with torpedoes, battleships are hulking gun platforms, and cruisers are straddling the line between the two. Then there are carriers (which we did not get to see) that eschew big guns for a squadron of planes to send out. Unfortunately, submarines aren't part of the mix, as the team decided that they wouldn't be fun for this type of game.

Each ship is as historically accurate in its looks and is hideously detailed, with up to 500 parts and 270,000 polygons. This detail comes into play when ships are damaged in certain sections, disabling features and abilities. The team is planning on launching with around 75 ships between the starting nations of the United States and Japan. 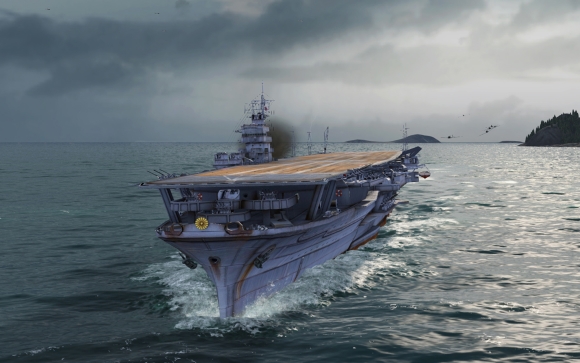 One new element for this game is the choice of an RTS playstyle. Any ship with a scout plane or the carrier with its attack squadrons can go into an interface to order these vehicles around on missions. Alternatively, a sniper-style gameplay with honking huge guns is present for first-person shooter fans. Players concentrate on the big picture of moving the ship, firing the main guns and torpedoes, and responding to damage while the ship automatically fires secondary guns and anti-aircraft batteries.

Even at this stage of development, World of Warships looks absolutely incredible. The water is spot-on, with the ships slowly bobbing up and down in it. When the main batteries fired, you could see a sonic blast and the white foam of disturbed water underneath them. Once several ships got into the fray, the screen lit up in a visual ballet of death that looked like an action scene straight out of a World War II film.

World of Warships will "hopefully" be in closed beta by the end of this year.

Massively's on the ground in Seattle during the weekend of August 29th to September 1st, bringing you all the best news from PAX Prime 2014. Whether you're dying to know more about Warlords of Draenor, The Elder Scrolls Online, Landmark, or any MMO in between, you can bet we'll have it covered!
In this article: beta, beta-test, beta-testing, con, convention, event, event-coverage, events, expo, f2p, free-to-play, historical, massively-event-coverage, pax, pax-2014, pax-prime, pax-prime-2014, penny-arcade-expo, preview, previews, pvp, testing, war, wargaming.net, warships, world-of-battleships, world-of-warships, wows
All products recommended by Engadget are selected by our editorial team, independent of our parent company. Some of our stories include affiliate links. If you buy something through one of these links, we may earn an affiliate commission.