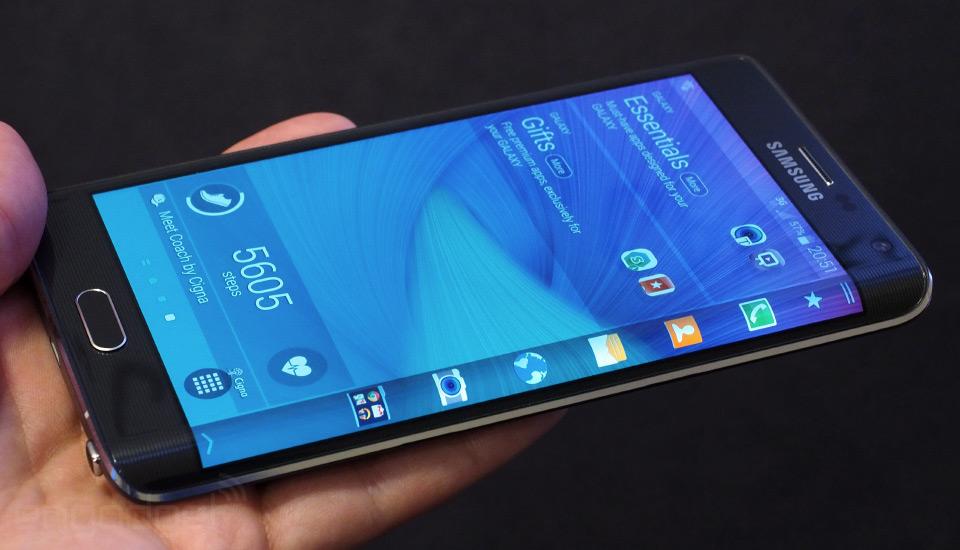 It's been over a year and a half since Samsung briefly (and from a distance) showed off the Youm, a prototype of a smartphone with a curved display that wrapped around the right-hand side. While it seemed like a far-off reality at the time, Samsung announced today that the Youm's spiritual successor -- aptly named the Galaxy Note Edge -- would be coming out this fall. Sure, mass-producing a phone with a bent screen is a tremendous display of manufacturing prowess, not to mention something to show off at parties, but is there more to this unique handset than eye candy? The Galaxy Note Edge is, in almost every respect, a Note 4. Almost all of the hardware and software enhancements that I outline in my Note 4 preview are present and accounted for in the Edge. The primary difference, obviously, is the 5.6-inch Quad HD+ bent display (the "plus" in Quad HD+ refers to the 160 rows of extra pixels used on the side display), and any variance in hardware here is to account for the phone's unique design: It's 3.8mm wider and 2.2mm shorter than the Note 4, and comes with a smaller 3,000mAh battery. If your hands already experience fatigue with the Note 3 or similarly large phones, the Edge likely isn't a good choice for you -- not only because it's so much wider (though that's a significant factor), but also because the right side of the phone, where the screen meets the back, is actually quite sharp and an uncomfortable place to grip the phone. (Insert obvious "cutting edge" or "bleeding edge" joke here.)

There's a special kind of beauty to the Note Edge that comes as a result of its brand-new form factor. Aside from a very brief encounter with the Youm prototype phone at CES 2013, we've never actually seen a device with a bent display. Despite the fact that it's not as comfortable as the Note 4, Samsung did a great job of blending its counterpart's design language with the form factor. It's a very sleek-looking device, and I found it hard to stop staring at it -- even when trying to play with some of Samsung's other products. The phone maker will definitely be charging a premium for the Edge, but it will at least come with some serious bragging rights and a whole lot of people suddenly paying attention to you (or your phone, at least). But the edge display isn't just a pretty face. Since the whole point of the phone's very existence is the screen, Samsung made sure to add enough functionality to put it to good use. In fact, it serves many different purposes, and once developers have access to the SDK (which Samsung says should come out very soon), there will be plenty more ways to take advantage of it. That is, as long as you're a right-handed user. Since the display bends only on one side, it isn't quite as convenient for left-handed users; Samsung believes this shouldn't come as a deterrent because it's easy enough to just flip the phone around and use it upside-down instead. This would be fine in theory, but it's still a huge inconvenience if you plan on using the home button or making phone calls at all.

The UI of the bar is straightforward and basic, since there isn't much you can do with a narrow strip of display space. Often, what's shown here will depend on the app: If you're in the camera or watching videos, this strip becomes a sidebar containing all of your shortcuts and settings so they don't take up other valuable screen space or get in the way. However, you can still access a plethora of different types of bars, whether in or out of the app; notifications, weather info, stock tickers, clocks, news feeds, quick shortcuts and even games are available from nearly every screen. There's only one game -- a Simon-like memory game -- available right now, but I'll be interested to see what else developers can come up with. Swipe up on the bar to reveal a settings button that lets you manage which types of bars are displayed and in which order. If you swipe down on the bar instead, a toolbar pops up. Here you'll find options like a timer, stopwatch, flashlight and a ruler (the latter is actually a really clever use case). The settings menu is your key for adding your own customized stuff. You can take any image and crop out a narrow, 160-pixel strip; although I didn't see much functional value in this, having the ability to show off pictures of the family or your pets can be a neat touch. However, as developers start adding the edge display SDK to their apps, I'll be interested to see what kinds of stuff they come up with. I'd love to have to-do lists show up here, as well as incoming tweet mentions, Facebook messages and any custom notes, among other things. Basically, any type of viewable information could find a home here.

One of the handiest use cases for me is the night clock, which does exactly what it sounds like -- a black-and-white digital clock will appear while the screen is dark. So whether you're sleeping in bed and your phone is on the nightstand, or if you're just at your desk and want to see the time, the bent display makes this a rather ideal option. It's probably not enough to justify spending the extra money for a new phone, but it's just one example of the flourishes Samsung has added to give the edge screen enough functional value, instead of being just another way for the company to show off its manufacturing talents. I couldn't help but feel as though this is a work in progress (and very much a niche product for now), but this shouldn't come as a surprise because it's the very first of its kind to hit the market. A year from now, provided there's enough excitement and developer interest, it could be a very different story.

Update: AT&T, T-Mobile, Verizon and Sprint have all confirmed that they'll carry the Note Edge when it launches.

In this article: android, android4.4, bentdisplay, curveddisplay, flexibledisplay, galaxynoteedge, hands-on, ifa2014, mobilepostcross, noteedge, poll, samsung, samsunggalaxynoteedge, video, wedgies
All products recommended by Engadget are selected by our editorial team, independent of our parent company. Some of our stories include affiliate links. If you buy something through one of these links, we may earn an affiliate commission.