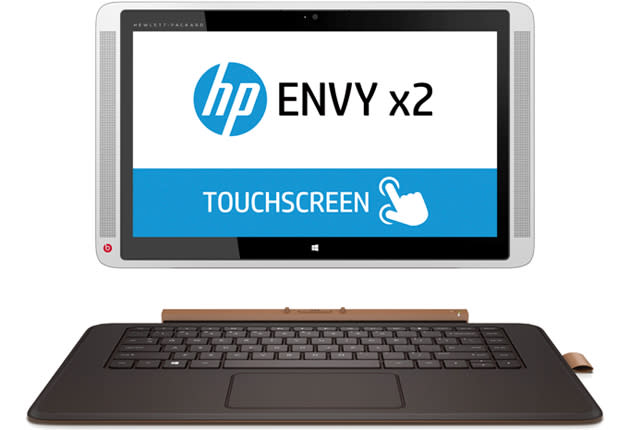 HP definitely isn't showing up to IFA empty-handed. To start, it's greatly expanding its line of detachable Windows tablets beyond the middle-of-the-road Split x2. The star of the show is undoubtedly a revival of the Envy x2 line. It's much more powerful this time around -- the tablet is using Intel's fast-yet-efficient Core M processor instead of an Atom chip, and it now comes with a much larger 13.3- or 15.6-inch screen. HP has also switched from a (relatively) conventional laptop design to a fabric-wrapped Bluetooth keyboard that's supposed to be more flexible. Be prepared to pay for all these upgrades, though. The 15.6-inch Envy will cost $950 when it reaches the US on November 5th, and its 13.3-inch counterpart hits October 29th for $1,050. Thankfully, HP is introducing a cheaper option if the Envy x2 (or even the Split x2) is beyond your reach. The new Pavilion x2 isn't nearly as powerful between its Atom processor and 10.1-inch display, but it will start at a decidedly more reasonable $330. The 11.75-hour battery is pretty appealing, too, and the Pavilion is relatively easy to carry at 0.41 inch thick and 1.2 pounds in pure tablet mode (0.69 inch and 1.9 pounds with its keyboard). It should arrive on October 29th. To top things off, HP is beefing up the performance of its Chromebooks. The tinier Chromebook 11 now uses Celeron processors instead of Samsung's aging Exynos 5250, while shelling out for the larger Chromebook 14 will get you the same NVIDIA Tegra K1 chip that we saw in Acer's Chromebook 13. There's no word on whether or not the K1 will give HP the same super-long battery life, but we're hopeful. Whichever Chrome OS system you choose, you won't pay a lot. The 11-incher will cost $280 when it arrives on October 5th, and its 14-inch sibling (due October 22nd) is only slightly pricier at $300.

In this article: atom, celeron, chromebook, chromeos, corem, envyx2, hp, ifa, ifa2014, pavilionx2, tablet, windows, windows8.1
All products recommended by Engadget are selected by our editorial team, independent of our parent company. Some of our stories include affiliate links. If you buy something through one of these links, we may earn an affiliate commission.