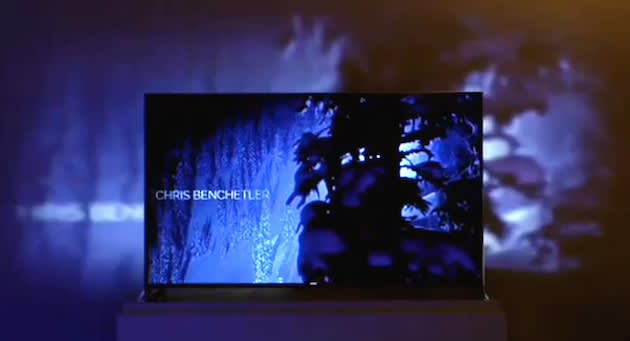 Philips has been hawking Ambilight HDTVs with a series of customizable LEDs that let the picture "bleed" onto the wall behind for a decade now. At the company's annual IFA press conference, however, the company closed the show with a concept video called Afterglow, which, if it becomes a reality, might make TV viewing significantly more immersive. In a demonstration, action shots were recreated in detail beyond the bezel, as if some short-throw mini projectors have been welded to the underside of the TV. After asking around, it transpires that the tech isn't a concept as much as a very early prototype, and the technology won't be arriving until 2016 at the earliest. In terms of how the company has made the images, it won't say beyond that it's a "new" process, but since it hasn't been patented, no one's prepared to talk details. Still, given that Microsoft's Illumiroom isn't likely to become available to the mainstream, perhaps Philips' slightly more modest version might be the way forward.

In this article: afterglow, ambilight, hdpostcross, ifa2014, philips, tv
All products recommended by Engadget are selected by our editorial team, independent of our parent company. Some of our stories include affiliate links. If you buy something through one of these links, we may earn an affiliate commission.