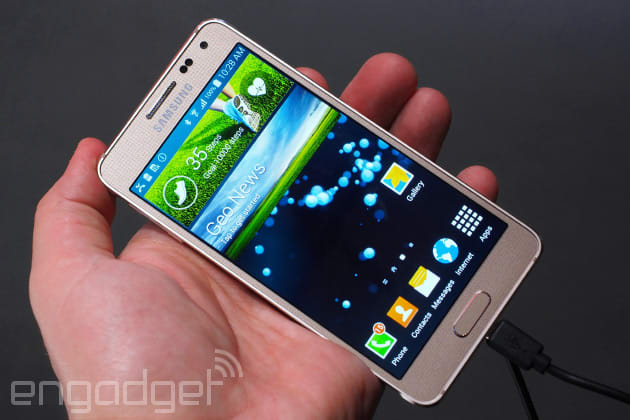 Aluminum sides, chamfered edges, slim profile, solidly built back -- this is what Samsung's chosen as its brand-new design language, and it's why the Galaxy Note 4 and Note Edge (which was introduced this week) have a premium look and feel. But the new Note isn't the only device with the same type of setup: It has a smaller sibling called the Galaxy Alpha that was announced just three weeks prior. The Alpha, which should be making its way into select markets (such as the UK) this month, is a compromise for those who want a good-looking phone, but don't want one that's so large. With a 4.7-inch (720p) display, 6.7mm profile, 115g (4.06-ounce) weight and aforementioned design language, the Alpha is tight, light, slim and classy. Since it's a little smaller than most modern-day flagships and comes with straight sides and chamfered edges, it's very easy to hold onto without losing my grip or feeling uncomfortable. The sides are also mostly flat until they approach the corners, where they curve slightly outward.

Despite the new design, the removable back still looks more like the Galaxy S5 than the Note 4; the latter has more of a leather-like appearance, whereas the Alpha's polycarbonate back uses a series of very tiny divots. The back itself is flat except where it slopes inward toward the edges. The phone will come in five different colors, and some definitely look better than others; this is one of those times in which the gold version actually looks a little better than the black one, since some of the front and back colors blend better with the sides than others do. The 12MP camera (not quite as high-quality as the GS5 or Note 4) sits in the top-middle, with an LED flash and heart rate monitor module to its left.

With a smaller screen, the lower-resolution display is completely fine; everything looked crisp and sharp. It also comes with the same fingerprint scanner as the flagship phones. The only thing that truly concerns me with the Alpha right now is the 1,860mAh battery, which is quite limited for today's standards (its battery is significantly smaller than the GS5's). It also doesn't come with external memory, so the 32GB internal storage will have to do. 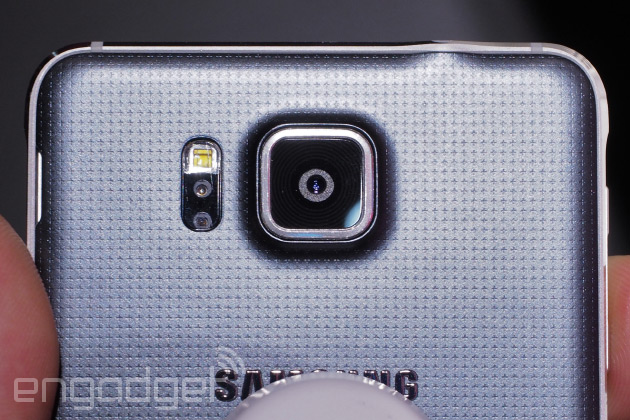 The Alpha will come in two versions, much like many of Samsung's other phones: An octa-core Exynos 5-powered option, which comes with four 1.8GHz Cortex-A15 cores for higher performance and four 1.3GHz Cortex-A7 cores for smaller tasks, and a 2.5GHz quad-core Snapdragon 801 version. Both options will come with 2GB RAM. Samsung uses this two-model setup often, in which the Exynos model is typically sold in Korea and other select countries, while the Snapdragon model goes to the remaining regions like the US and Europe.

With a few exceptions, the Alpha seems to look like another Galaxy S5 mini of sorts, but with better specs and more elegant design. While Samsung is still keeping quiet on pricing -- odds are it'll be dictated by region and carrier -- it will likely be higher-priced than many of its competitors. If it manages to be competitively priced, however, the Alpha could easily become a hit among shoppers who want something more on the classy side without getting a monster-sized phone.

In this article: alpha, aluminum, android, design, elegant, galaxyalpha, google, hands-on, ifa2014, mobilepostcross, samsung, samsunggalaxyalpha, touchwiz
All products recommended by Engadget are selected by our editorial team, independent of our parent company. Some of our stories include affiliate links. If you buy something through one of these links, we may earn an affiliate commission.